At Queen's Film Theatre in Belfast

I did find it very inspiring not only to invite Young Audiences to take part in programming but also to find or bring their outlet for content – do they want to have talks after a screening, do they want to create a film podcast or maybe develop content for social media to share and inspire other youngsters to enjoy movies? 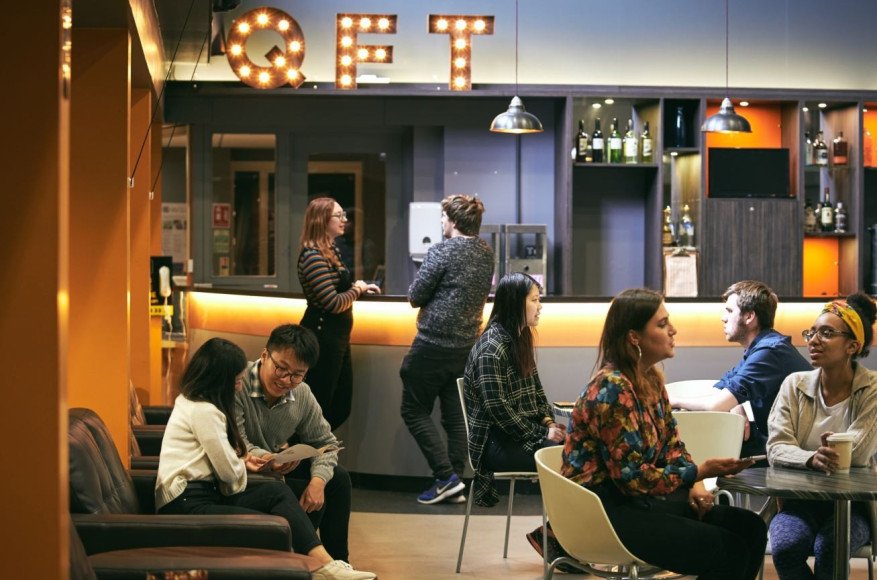 Arriving in Belfast late on a rainy Friday night in October I was buzzing with energy upon this Exchange-Adventure. Back in spring, when the e-mail arrived, giving me details about the exchange programme, I was quite interested and started looking at a number of theatres on Europa Cinemas website to choose wisely as to which cinema I wanted to go to. It is terribly hard to choose – all of them offered a unique point of view on how to do cinema, but somehow Queen’s Film Theatre just tickled my interest the most. Having made the decision to do the exchange in October, I even got a double-pack: the Cinemagic Film Festival was in town taking place in Belfast's QFT at the time. Getting to visit another EC cinema and getting to sneak a peek behind the scenes of the screenings and events that are part of the Cinemagic Film Festival – well, that did settle it and I ended up right in front of the beautiful little building, which blended just right into the street.

The venue is beautifully located sharing its foyer with The Brian Friel Theatre and the Brian Friel Centre for Theatre Research. The building is also used for lectures for students of the nearby Queens University. You can snuggle up in the leather sofas and just stay for a while.

Gabrielle Smyth, Operations Manager, and super-welcoming person took me in, gave me a cuppa and a quick overview of the building and a brief glance into the history of now 51 years of QFT. She also informed me about how they are running their cinema, which is when the first major difference turned up in our conversation. We at the Broadway film theatre employ staff that runs the cinema in terms of projection, ushers and selling tickets at the box office while also covering duties in the back-office. The QFT on the other hand has a more distinct separation between the people that do programming, audience development, etc. and those who are responsible for the day-to-day duties of running a cinema. They also have way more staff behind the scenes and a more clear-cut hierarchy than we do, despite us being a bit larger in terms of front of the house staff and number of rooms. This gave me some pretty good insights regarding staffing and the changes we plan to do at our cinema regarding the organization of work. While I could not see myself not being involved in the everyday operation, we are about to implement some of the routines they do.

On Saturday morning, I meet up with Aaron Guthrie - Young Audiences coordinator - and Patricia Donohue – Technical Manager. Aaron shared his experience with YA and talked about Lumi. LUMI is Queen’s Film Theatre’s new offer for people under 30. I sneaked in at the LUMI Film Programming: Talk + Q&A, where they invited young people, who signed up for a programme to programme films, create content, talk film and get involved in the process of making cinema. I did find it very inspiring not only to invite YA to take part in programming but also to find or bring their outlet for content – do they want to have talks after a screening, do they want to create a film podcast or maybe develop content for social media to share and inspire other youngsters to enjoy movies? LUMI/QFT is ‘The world is their (film-) oyster’. How can one not be 100% energized by this to go out there and do brilliant cinema events for and with YA? 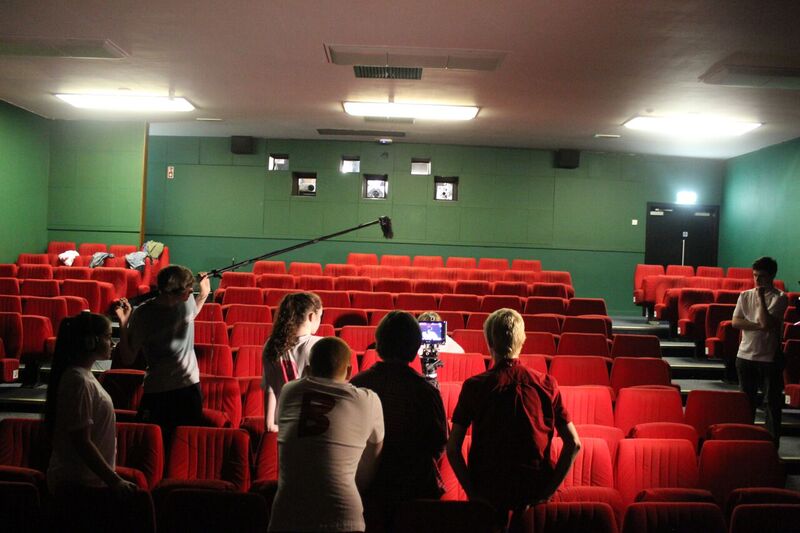 Patricia took me with her into the projection booth and we talked about the pros and cons of data transfer via the internet, which application to use and it was quite nice just to see that we all sometimes struggle with the same silly little day-to-day things with regard to the projection.

Screenings for people with special needs

After that, I met Joan Parson, who is head of QFT and we talk vividly about doing cinema – about the many professions people that do cinema and programming come from, about the differences in every organization and the luck we have to be independent cinemas. I also got new input from her for the programming of special screenings. Since I want to take a step towards a wider range of screenings for people with special needs, which would contribute to our standing as the local cinema that makes an effort and keeps on improving. In my opinion, this would also help to strengthen our brand. Turns out, we already do a lot (which is nice) but also a change of perspective is sometimes just what you need. The QFT does screenings for people with dementia and in talking about it, that our cinema for the elderly already contains a lot of elements of this, so with some slight adjustments and a new perspective we can reach out to another group of movie lovers and provide them with a cinema experience that suits their needs.

Next on my list and just perfect for an autumn-y Sunday was ‘to be a silent observer’ at the workshops held in the museum at the botanical gardens. I attended Create Your Own Flip Books with Francesca Kennedy and Film Poster Making with Trisha McNally (both being very welcoming, so were the kids that attended). Afterwards I was able to catch Joel Simon, practicing animator and founder of can-do-academy in Belfast, for a chat about involving local artists in creative workshops for kids. We are already working on a programme for 2020 with students of intermedia design of the university of applied science Trier for not only workshops but also, taking inspirations from Aarons work, invite them to exhibit at our venue, show their content on the big screen and make us more approachable for cooperation.

Last but not least, on Monday I was very happy to have a good talk with the two Michaels of QFT. One, (Michael Delaney - Audience Development Assistant) shared his experience with their approach to social media. The other one (Michael Staley – Programmer) told me about how they build their programme, the challenges they are facing doing cinema with 2 screens in a city with approx. 280.000 citizens and 7 cinemas (compared to our town with 110.000 citizens and 2 ½ cinemas). We both were a bit shocked about the differences in the fees we pay for movies and the rate they subside week to week. Turns out, we have (besides that) a lot in common – we compared our expectations about upcoming movies or movies we both had featured in our venues.

I left QFT and Belfast with a suitcase full of get-up-and-go spirit for our cinema to face new challenges in 2020 and the enthusiasm to give new projects like the ones mentioned above a try. I hope the exchange helps to connect ‘cinema people’ all over Europe and strengthens the European cinema community – especially with Brexit looming over all of us.