At Paradiso cinemas in Sankt-Polten and Baden

Back to the "time before" with this report of the last Next/Change exchange, before the travel restrictions. Eva Demeter from Tisza Mozi in Szolnok, Hungary tells us here about her visit to the two Paradiso cinemas in Sankt-Polten and Baden in Austria. While waiting for the possibility of supporting new exchanges, let's look back on this experience, which inspired, among other, the introduction of a loyalty card. 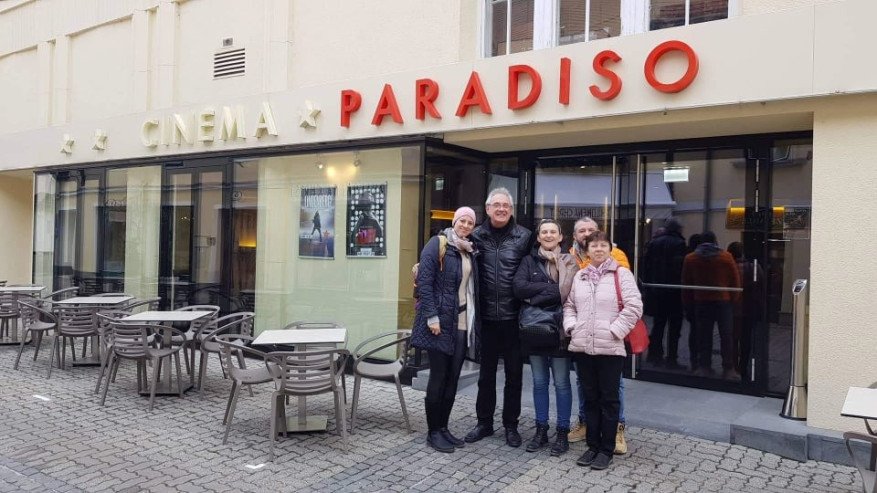 The idea of visiting another cinema close to Hungary came from my director (and father!), István Demeter. Since the summer of 2019 our cinema has been undergoing renovation and as we were coming to the end of the year, Istvan dreamed of a field trip for the beginning of 2020.

We are a family run cinema and each of us has a different role: my mother is the programmer, my brother is the projectionist, my sister is the assistant and I am the international relations coordinator. Istvan’s idea was to travel together and provide the family members an opportunity to exchange ideas personally firsthand. We had visited other Hungarian art cinemas in 2019 and we found it very useful to see how other art houses work. Our motto is “let’s learn something new”! and that is what we were looking for in this exchange. With Alexandre Tchernookov’s guidance, we identified two Austrian art house cinemas for our exchange – both, run by the same company, are called Cinema Paradiso butt one is in Sankt Polten and the other in Baden.

Get in touch with the host cinemas was easy and the dates were picked for a one-day visit of each cinema. We immediately received a warm welcome when we stepped inside the theatres.  Victoria was our “tour guide” in Cinema Paradiso Sankt Polten and Ana in Baden. Each of us was interested in different topics such as how their loyalty card works, how concerts are organized, what their relations are with schools, what is a cinema breakfast, why they have different ticket prices, how the staff is organized etc. Victoria and Ana did a great job, showed us around and answered all our questions.

It was very interesting to see many similarities between our cinema, the Tisza Mozi, and the two Cinema Paradiso and this is why the differences in the number of visitors per year surprised us. Even though there are many resemblances in the work practices, programs organized, attributes of the cinema itself and the staff’s efforts to attract the young generation, Cinema Paradiso in Sankt Polten and Baden have many more visitors than we do. Both our cinema and the Cinema Paradiso in Sankt Polten have three screening rooms. The difference in the number of the seats is obvious but the advantage for Cinema Paradiso is that two of their three screening rooms are multifunctional. This gives the cinema added flexibility in their programs, allows them to welcome more people to various events and to attract different age groups. Their loyalty card scheme is also appealing, whereas we have no such card and would be interested in implementing a similar one at home. Victoria informed us in detail of the advantages of Cinema Paradiso’s Club Card and said they have more than 800 cardholders – proof of its popularity among their audience.

There is a multiplex in Sankt Polten – in Szolnok as well – the number of the inhabitants is 54 000 in Sankt Polten, and 25 000 in Baden. Admissions in Sankt Polten were 75 000 and more than 80 000 in Baden for 2019. Szolnok has 71 000 inhabitants and we had 45 000 spectators last year. We came to the realization that although we do our best to organize all kinds of programs focusing on all ages, there are differences in culture, wages and even in the leisure habits of Hungarians and Austrians and this accounts for the differences. 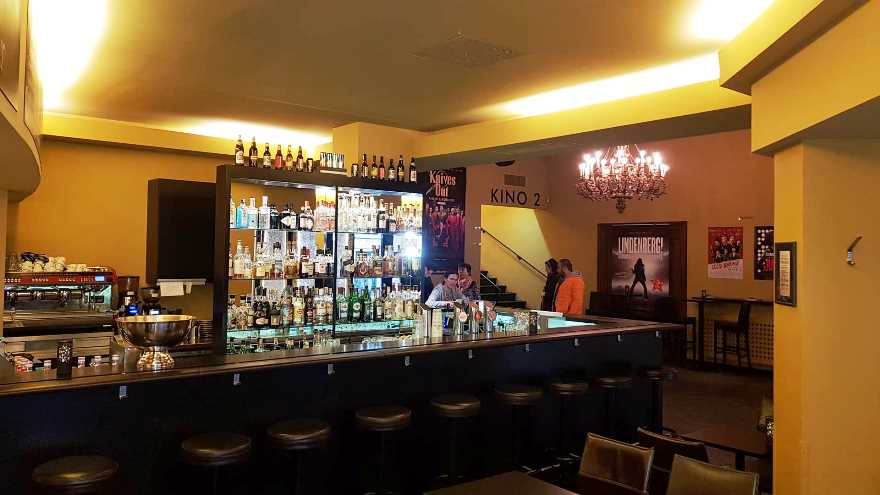 Tisza Cinema and the 2 Cinema Paradiso are not only cinemas but also meeting points for the local residents where people come to talk and have a drink or tea. Cinema Paradiso theaters also have a Cinema Breakfast event and Cine Café Mondays to attract the audience on a difficult day with regards to takings in Austria (and Hungary). Both programs offer drinks and food for a reduced price together with a movie. Likewise, all three theaters have terraces on good locations and there are open air screenings organized. Open-air screenings are big in both Austrian cities as they have a main square next to the cinema and a fenced-off terrace: access to the terrace is for those who have tickets to the films. In Hungary, Tisza Cinema has a relatively small terrace surrounded by buildings so we show free movies from April to October.

There are still many other similarities between our cinemas but the last one I wanted to mention concerns the live concerts. While there are 1-2 concerts a week in Sankt Polten, there is only one concert a month in Szolnok and Baden. In these two cities cinemas can only offer soft music events (jazz, pop, classical music etc.) as the rooms are not sound proof and have fixed chairs inside. In all three cinemas someone supervises the live event and a person is in charge to welcome the band and makes sure everything is fine technically.

We were so inspired by the art house theaters we visited that we even went to Vienna to see another family run cinema suggested by Victoria. This was not planned but an ad-hoc-visit of the Burg Kino. After which, we continued our exploration of cinemas in the town and had a look at Metro Kino (cinema of the film archive) and the Film Museum.

Thanks to this exchange, we have already started to implement our own Club Card in our cinema. We have thought long and hard to find a way to attract our audience with reductions and offers in our café and Cinema Paradiso’s card is a perfect model for us. If everything goes well, we are going to have a similar card up and running in the next couple of months. We would also like to introduce the Cinema Café Mondays and later on, the Cinema Breakfasts. We also invited our Austrian colleagues to come and visit our cinema and to work together on joint projects in the future. We hope that they will come and that we can develop a long-term partnership!