European cinema’s strongest advantage is the cinema theatre itself, according to many. But, it can also become its staff, together with the inextricable bond created between each film institution and the local community. Placed between innovation, research and development and attentive curation, Cineteca di Bologna stands as an exemplary organization, offering everything a true cinephile can desire. 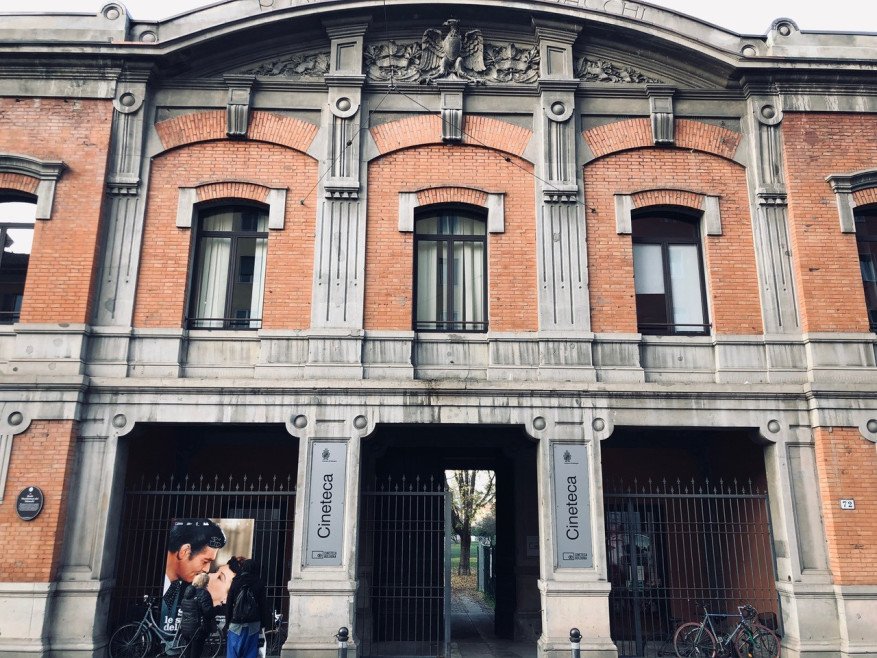 It was an immense pleasure, joy and a great honour to be selected to participate in the Europa Cinema’s Next/Change programme and have the opportunity to acquire useful information and see from up-close how one of the most prestigious film institutions in Europe operates: Cineteca di Bologna and its Cinema Lumière. The reason I chose this particular organisation is that Cineteca di Bologna manages to present a strong visual identity, balances perfectly between a highly demanding annual activity and an extremely successful film festival (the acknowledged Il Cinema Ritrovato) and also succeeds in creating and maintaining very strong bonds with both the local community and the professionals from all over the world that visit the capital of Emilia Romagna every June.

During my stay in Bologna, I had the opportunity to accomplish various meetings with many employees from different departments, who tried to provide me with general knowledge related to the multiple tasks, objectives, and professional areas that this important institution (privatised in 2012, but still strongly supported by the region of Emilia Romagna) offers to both audience and professionals. During these meetings, I also tried to transmit my knowledge, as our institutions share many common elements.

Finding the right balance between new releases and heritage films

Together with my colleague Tellos Filis, I am currently working as a programmer for the annual programme of the Thessaloniki Film Festival, selecting and screening films in our 4 cinemas. Moreover, I work as the coordinator of Thessaloniki’s Cinematheque, an institution that belongs to the festival itself. Cineteca di Bologna also has an annual activity, based on both films  from the distribution circuit (called “prima visione”) and thematic retrospectives. Contrary to Thessaloniki’s program, however, the “prima visione” films occupy a rather small space in the program (only two films per week) leaving all the rest to Cineteca’s retrospectives that are more than five each month. Generally though, like Thessaloniki, Cineteca’s staff (and also the staff of Cinema Lumière, where the two main cinema screens are situated) have to deal with both artistic realities, balance between high quality art house films and heritage films that support, enhance and even promote the big event occurring every June: Il Cinema Ritrovato, a very important film festival which screens more than 500 films in total and includes great open-air screenings (attended by more than 3,500 people). 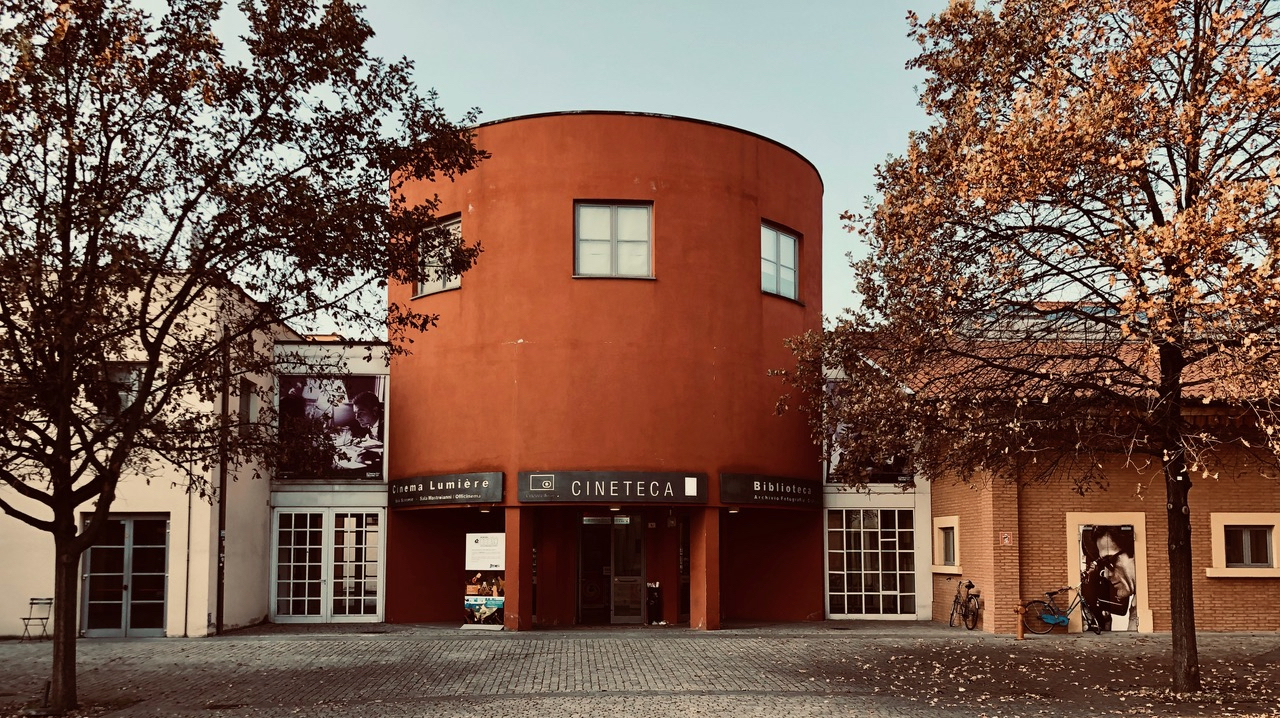 The History of Cinema in front of our eyes

Cineteca di Bologna was founded during the 60s by local film lovers and gradually established its position as one of the most prestigious and important film entities in Europe. Apart from the exhibition activity or the programming of the festival, Cineteca also has a substantial audiovisual archive with more than 40,000 titles, a vast cinema library situated at Cinema Lumière, various programs related to film education (it has developed strong collaborations with schools, important European institutions and the University of Bologna) and a marvellous bookshop selling various Cineteca editions. Last but not least, they are in close collaboration with Imagine Ritrovata, a substantial laboratory that deals with restoration, digitalisation and conservation of films. One of their most valuable contribution is the “Project Chaplin” a nearly complete restoration of all the works of Charlie Chaplin, that received praise from all over the world, including nothing less than Chaplin’s family themselves. One of the most interesting strategies regarding this long and laborious process of film restoration involves obtaining the screening rights of the films (for those possible) and thus deal with the distribution of the films, at least on the Italian territory.

Between meetings, screenings and activities

I could write many pages related to the diverse and utterly interesting activities, events and programs that this amazing institution has to offer, but I also have to refer to the extreme dedication, high cultural and scientific knowledge and maybe above all, to the immense love for cinema that each one of Cineteca, Cinema Lumière and Imagine Ritrovata’s staff reflected during our interviews.

During my stay, we had the opportunity to discuss, brainstorm and exchange ideas around promoting strategies, programming, the relation between the festival and other film events or simply to reflect about the relationship between the cinema hall and the relatively new form of audiovisual entertainment, namely VoD platforms. Elisa Giovannelli (my first contact with Cineteca and also the person who mostly took care of me) was highly informed and always available, especially regarding her area of expertise, the “schermi e lavagne”, a film education programme aimed especially at young children which includes activities aimed at training, creating awareness and passion in young audiences,  developing both  their critical judgment and enhancing their film culture. 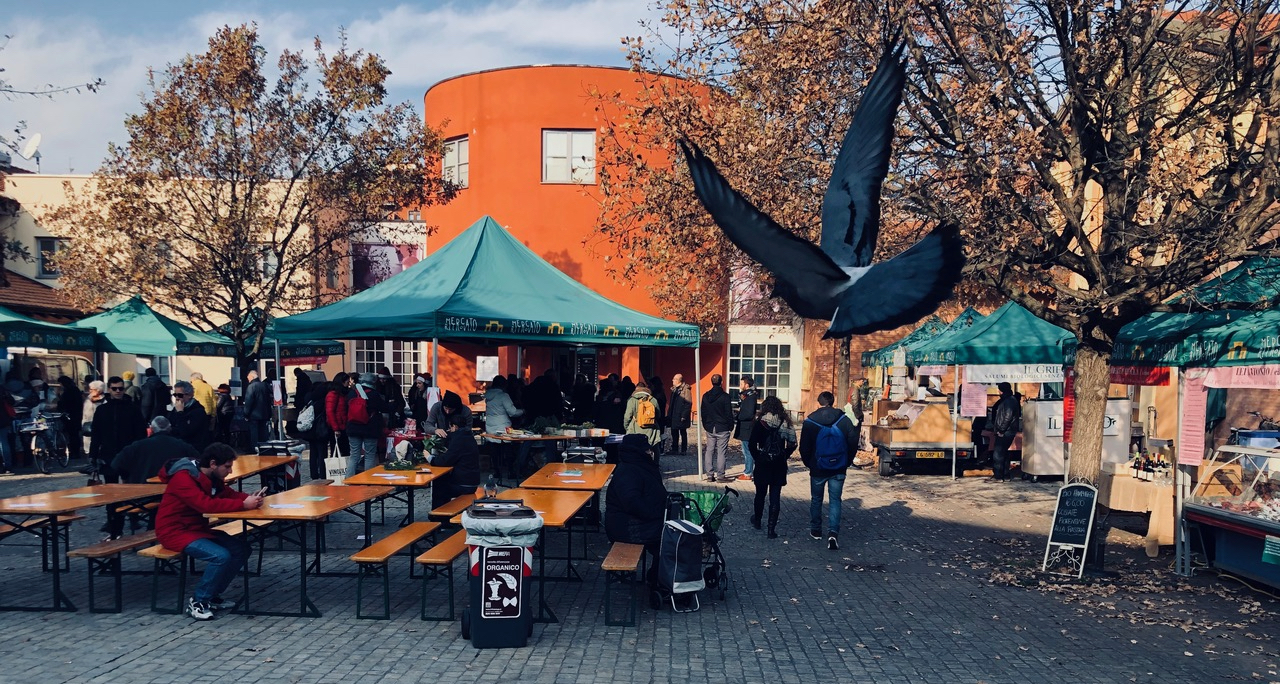 All meetings, all new experiences and networking proved to be extremely valuable for my personal formation but also for my work as a programmer. After participating in various events, having the opportunity to watch well-known art house films but also delve into some relatively unknown retrospectives, it now becomes clear to me that cinema, both as an institution and a physical place, must create strong bonds with the local community, establishing some sort of relation of trust between its staff and its audience. This is probably the only way to resist to the “domestic isolation” offered by digital platforms or the impersonal and typified entertainment offered by multiplexes. The image of a local food and vegetable market (cleverly called mercato ritrovato) at the Pasolini Square in front of Cinema Lumière is a great example of soliciting the local community to come closer to the institution, creating bonds of friendship and strong collaborations, like the ones I sincerely hope I established during my stay in this wonderful city. In conclusion, I have to admit that I cannot wait to visit Bologna again in the summer and participate in the festival or maybe the Bologna Lab, organised by Europa Cinemas.