CORPUS CHRISTI is a young adult’s deal: director Jan Komasa is 37 years old and his screenwriter Mateusz Pacewicz, is only 27 years old. During Venice Film Festival, where the film was awarded with the Europa Cinemas Label, the Irish ambassador for 28 Times Cinema interviewed Mateusz, for whom CORPUS CHRISTI is a first feature film. The film has since then been selected to represent Poland in the Oscars race. Below is a report of their conversation: 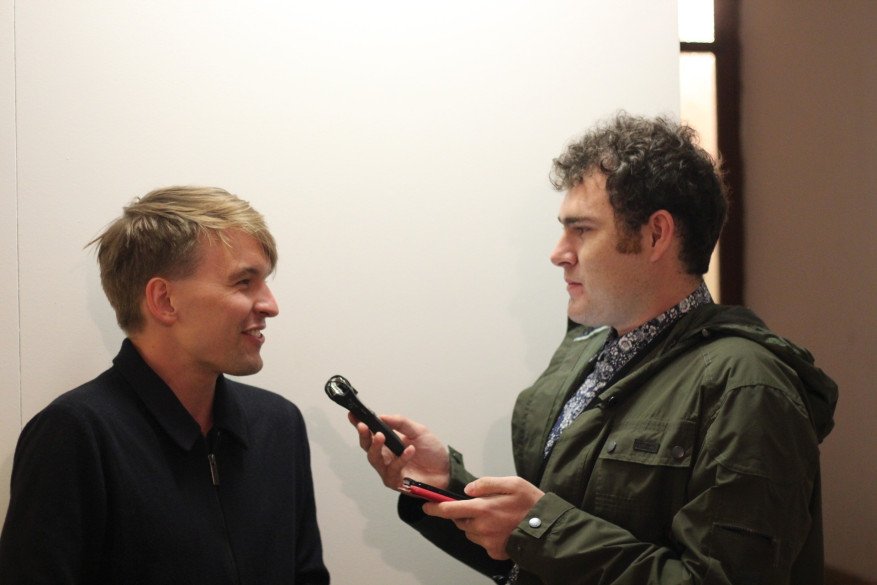 Venice Film Festival goers were blown away by Polish drama and Europa Cinemas Label winner CORPUS CHRISTI, centring on a young ex-convict who masquerades as a priest, duping a small-town parish. That said, many were perhaps unaware of the story’s basis in real life.

“I was obsessed with true stories about priest impersonators from Poland,” says screenwriter Mateusz Pacewicz. “It happens. Every year - sometimes every half year - there's a new case. It's a social phenomenon. Even where we were shooting the film, it came out there was a priest impersonator there. It's that popular.”

“What fascinated me from the beginning was the ambivalence of the premise. We have somebody who maybe just does it for money. Perhaps, it’s also for some emotional profit. He wants to feel he's someone better than he really is. Maybe it’s a whole different reason. This multi-dimensionality was what kept me going working on the story.”

To prepare to write CORPUS CHRISTI, Pacewicz also studied the New Testament and read about Menocchio, a 16th century Italian miller burnt at the stake by the Inquisition for his unorthodox religious views. The latter was deeply devout to God but critical of the Catholic Church’s wealth stating: "I believe the spirit of God dwells in all of us ... and I also believe that anyone who has studied can become a priest without being ordained, because it is all a business.”

The spirit of Menocchio certainly looms large over CORPUS CHRISTI. Yes, the central figure of Daniel (a star-making turn by Bartosz Bielenia, nailing the duality of his character) perhaps begins his deception for selfish reasons. Yet, he is a true Christian who winds up doing more for his new community - a village still healing from the aftermath of a car crash which killed numerous of the town’s teens – than its previous minister.

According to Pacewicz, the film depicts what might happen if the Catholic Church returned ‘to its roots of solidarity and a more democratic structure.’ Elaborating the writer says: “What's weird about Catholicism is it's an extremely hierarchical organisation. This doesn't really make sense when you read the New Testament.”

Corpus Christi impressively juggles tone, switching between comedy, drama and more thriller elements. “That was the most difficult thing for me – to balance those genres,” says Pacewicz. “I was afraid it would become lukewarm in the end, lacking intensity because of those different aspects.”

“But I felt it was the only way I could tell this story - to have a little of those funny moments where we laugh because we see someone like us in a situation very different to ours. Those laughs are moments of empathy with this character who otherwise can be quite distant.”

Pacewicz praises the film’s director Jan Komasa for helping navigate those tonal shifts. “He did a tremendous job at balancing it, something I struggled with while writing. He creates this chaos where actors will improvise a scene for ten minutes that has little to do with the three sentences we need.”

“While on set, I was like 'where's my script?'. But later watching the dailies, I thought 'Oh, here it is. Everything is right'. I don't know if it's just intuition or a plan but he creates this organic atmosphere where stuff just happens and he gets exactly what he wants and nobody notices when.”

The two are set to collaborate again on a substantially different project, Suicide Room: The Hater, a sequel to Komasa’s 2011 tech thriller. “Right after CORPUS CHRISTI began, Jan asked whether I'd like to work on another film. It tells the story of a young guy from a small village who comes to this elitist family because he's in love with their daughter.”

“He is rejected by this big city family and seeks vengeance through his job at a buzz marketing agency where he creates fake news and destroys people. It is very different to CORPUS CHRISTI. It's not quiet. It's loud.”

One hopes their upcoming film will continue Poland’s strong cinematic output of late (Pawel Pawlikowski’s 2018 drama Cold War garnered three nominations at this year’s Academy Awards). Speaking about his nation’s cinema Pacewicz says: “A few years ago, Corpus Christi might have gone unnoticed. Back then, we didn’t have sales agents interested in Polish cinema. It was like ‘yeah send us the link, maybe we will watch it.’”

“It’s changed significantly over the last five years. There’s this surge. I think it's partly connected to Pawlikowski and his recent success. Right now, when you do something in Poland, people in Los Angeles - if it gains some international recognition - will know about it.”

Pacewicz was full of praise for the Europa Cinemas Label recognising CORPUS CHRISTI. Awarded by a jury of Europa Cinemas exhibitors, the prize aims to increase the promotion, circulation and exhibition lifespan of winning films. This is through various schemes aimed at raising the top movie’s profile.

“These awards are extremely important. Movies like CORPUS CHRISTI are intimate and quiet. They can get lost amongst today’s overwhelming amount of content. From this perspective, these awards can be a game-changer for a film like ours.”

Pacewicz is also delighted the CORPUS CHRISTI will get to be screened in theatres. “Personally, I find it very hard to fully experience a film without watching it in a cinema. It's a completely different ritual, one that is very needed in the short attention span time we live in. Corpus Christi would be difficult to watch on your tablet while jogging.”

“I believe this is a story that can resonate with many diverse cultures and people from different contexts. This prize is another step towards sharing our film with viewers from all over Europe and the world.”