BEST PROGRAMMING 2020 - Located in the heart of Thessaloniki, Northern Greece, Olympion is a lively cinema hub, housed in a landmark six-floor building complex. Designed in the 1950s by French architect Jacques Mosset and renovated in 1997 when Thessaloniki was the European Capital of Culture, it is one of the most iconic venues in the city. 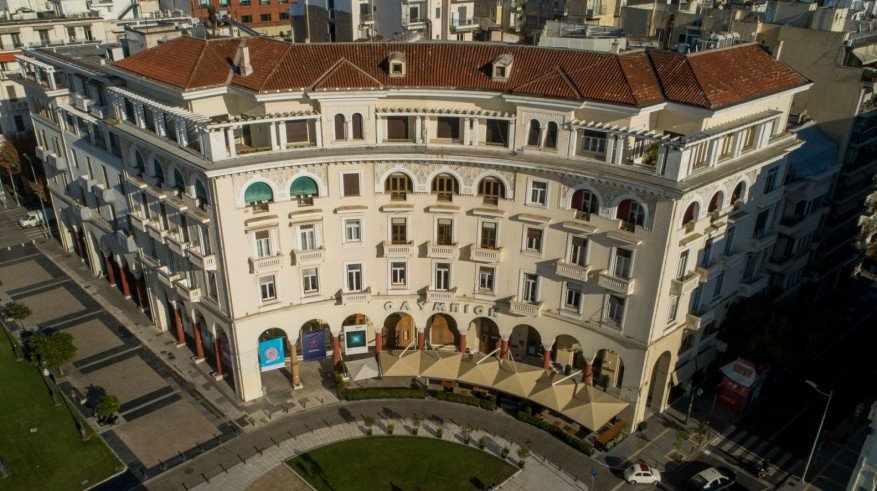 Olympion is managed by the Thessaloniki Film Festival, for which it has been the headquarters since 1998. The cinema houses two auditoriums: “Olympion” (676 seats), and “Pavlos Zannas” (192 seats). Olympion offers quality films from all over the world and a wide variety of cinematic experiences all year round; engaging tributes, special events, workshops, morning school screenings, presentations, etc. It also hosts the Thessaloniki International Film Festival, which is held in November, as well as the Thessaloniki Documentary Festival, held in March.

The two screens at Olympion have been part of the Europa Cinemas network since 2000. Nearby venue, Warehouse 1, with its named auditoriums, “John Cassavetes” and “Stavros Tornes”, is also operated by the Thessaloniki Film Festival, and became part of the network in 2016. Together, with our Cinema Museum, Cinema Library, and Cinematheque, the festival’s theatres comprise a highly dynamic cinema-oriented cultural complex.

Our challenges involve developing new ways of attracting a younger audience and building stronger relations with existing audiences. Our initiatives towards this include the Olympion’s 20th anniversary campaign, offering free admission to 20-year-olds for a whole year. More than 3,800 free tickets were issued in 2018 as part of this initiative, encouraging a generation of young people born in 1998 to choose the movie theatre and bring their friends along with them. Thus, we reached a much wider audience of younger people who became better acquainted with cinema culture. Another important initiative which strengthened the relation with our audience was the renovation of the Olympion’s seating through a crowdfunding campaign, successfully completed in May 2020.

Our motto is “Festival all year round” and our intention is to offer, with every film screening, the exceptional cinematic experience usually associated with a film festival. Our strategy and initiatives expand our theatres’ dynamics by connecting cinema with social events as well as other art forms — visual arts, literature, comics, photography, etc. Our Cinematheque focuses on European directors and film movements through dynamic tributes that unveil the complexity of cinematic art in a contemporary way. Recent tributes focused on classics like Melville and Bergman, among others, while we also invited film students to choose their beloved films, and to present and discuss them with an audience.

In October 2019, we welcomed legendary costume designer Anthea Sylbert, and in December that same year, we hosted the 2nd European Cinema Night by screening 4 MONTHS, 3 WEEKS and 2 DAYS by Christian Mungiu, followed by a Q&A with the actress Laura Vasiliu. Among the most successful first-run films for us from 2019 – 2020 were: COLD WAR, PARASITE and ABOUT ENDLESSNESS.

Every year, when our venues close for the summer (like all winter cinemas in Greece), Olympion’s spirit goes open air: in 2019, we hosted two successful free admission open-air screenings: NORTH BY NORTHWEST at the Thessaloniki Port and CINEMA PARADISO in Aristotelous square, each attracting more than 2,500 spectators. From July to September we also organized open-air screenings on the breathtaking terrace of the Thessaloniki Concert Hall.

One of our main goals is to pass on our love for films to new generations of filmgoers through special educational programmes, screenings, and workshops. As such, every Sunday, we present “Kids Love Cinema” screenings at Olympion, which include films and documentaries for children of all ages. Children’s workshops and summer camp activities are also organized in our Cinema Museum.

Despite the harsh reality of crisis in the ongoing pandemic, the Thessaloniki Film Festival was one of the first cultural institutions to offer art during lockdown. Our lockdown initiatives aimed to maintain an uninterrupted dialogue with our audience.

We invited filmmakers from Greece and beyond (Jia Zhang-ke, Ildikó Enyedi, Albert Serra, Teona Strugar Mitevska, Nanouk Leopold, Radu Jude, Syllas Tzoumerkas, Marianna Economou, and others) to create short films inspired by their lockdown experience. The result was a series called “Spaces”, still available to watch on our YouTube channel, that received enormous support from our audience (the project has more than 102,000 views so far) and attracted interest from media, educational institutions, and festival programmers from all over the world. We also launched children’s activities such as script writing and directing competitions in an attempt to maintain a creative cinematic spirit for kids in lockdown. We organized online screenings, among them the 3rd European Cinema Night, in November 2020. Free tickets for THE AUDITION “sold out” in a matter of minutes.

In the wake of the pandemic, our challenges are numerous: we are focusing on making people feel safe in cinemas by investing in sanitary equipment, adapting our schedule, changing our protocols, training our team, developing a contactless experience (with the help of our newly launched app), and communicating to our audience - in a playful and entertaining way- all of the details of these safety protocols.

Another challenge will unfold in the following months as we will fully evaluate the impact of the pandemic on film production and distribution. The ecosystem might change drastically, and we believe that, even if our role as a cinema remains the same, we will have to adjust to a new media chronology, new players and new economic models. Overall, we believe that our strategy “festival all year round” is, now, more relevant than ever, in order to keep offering our audience quality cinema with a focus on European, national, and arthouse productions.