At Lumière Cinema in Maastricht

We were very interested to see how they used elements of the venue’s former function – a warehouse of some kind – and used it to create a cinema-themed décor (lighting rigs, impressive unused projectors, old photographs and film memorabilia). The results was a modern, open space where customers can enjoy a drink or a meal, as well as a co-working space. 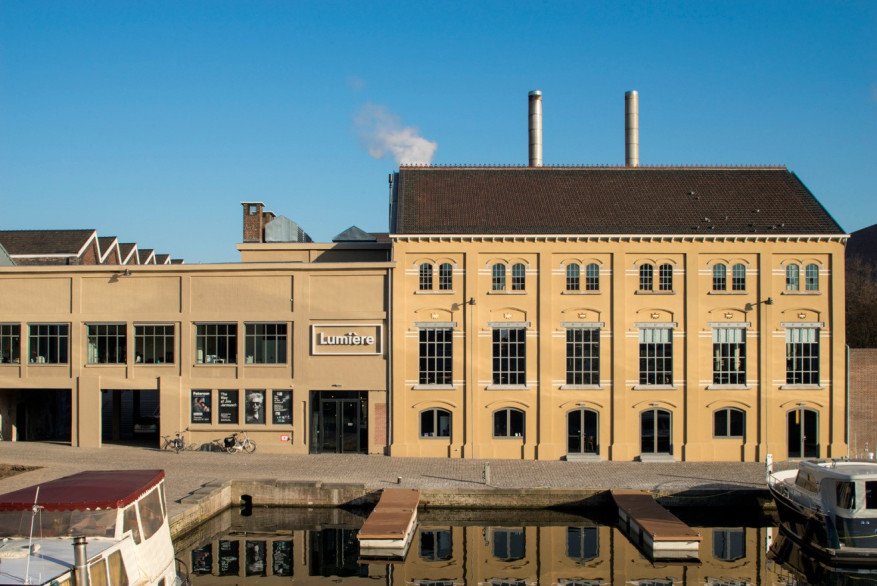 Visiting Lumière Maastricht had been on our bucket list for a while. Of course, Maastricht is somewhat close to Ghent, so we definitely considered those. However, apart from that, it is also a cinema quite similar to ours with many special events and a café, so it was certainly interesting to see how they handle all that. Then, the building in which Lumière Maastricht is located, is fairly new, so it’s also very interesting to see how they’ve remodelled their cinema to the needs of the modern cinemagoer, even though that won’t be in the cards for us just yet.

More precisely, “I wanted to have a tour in the new building, experience how this new cinema has integrated in the area, how it collaborates with the volunteers and local residents. I also wanted to see how restaurant and café fuse together with the cinema and we wanted to have a look at the new architecture, etc.” (Wendy Vercauteren). “I wanted to receive some advice for a website design that is simple but also allows to post useful and specific content, and I wanted to find out which of their events and specials are successful, to exchange information and be inspired to launch some new events at Sphinx” (Silke Bomberna). 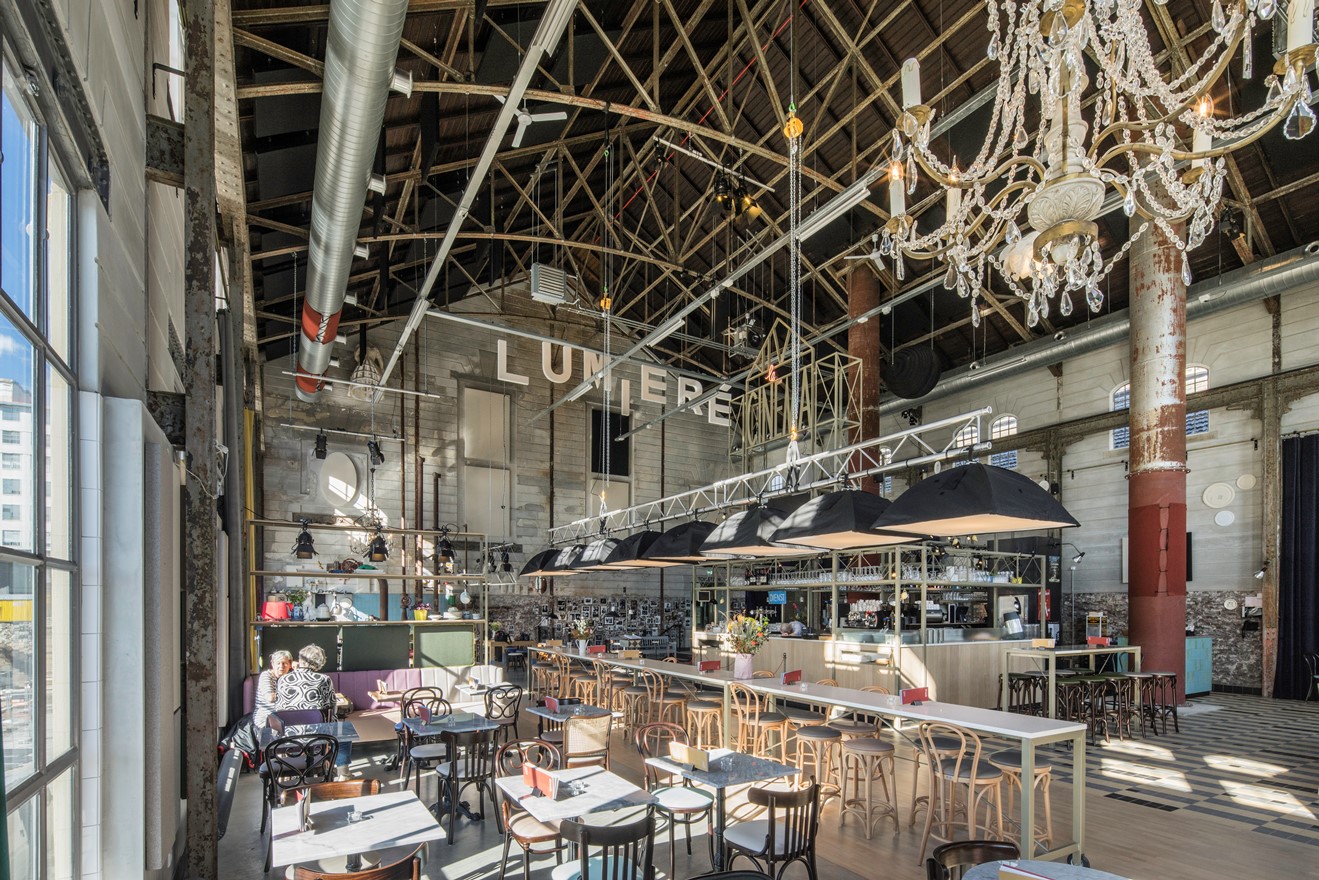 We started our visit at Lumière by a team-brainstorming session in the inspirational atmosphere of the Lumière café. We were very interested to see how they used elements of the venue’s former function – a warehouse of some kind – and used it to create a cinema-themed décor (lighting rigs, impressive unused projectors, old photographs and film memorabilia). The results was a modern, open space where customers can enjoy a drink or a meal, as well as a co-working space. It was interesting to see how they have handled it, since our cinema is also located in an old – yet less industrial – building. In any case, it was the perfect place to review our current special event programme and find ways to improve it.

When we toured the building, it was fascinating to see how they had constructed the cinema. Two of their six rooms are “boxes” inside a larger room, but completely soundproof. The rooms are also equipped for more than just the film: introductions, Q&A’s, presentations and even small concerts. One of the things they discovered, as a small downside of the minimalistic design, is that people often do not see the room number and are confused where their film is playing. They have solved it by crafting large room numbers out of old movie posters that are clear but still fit within the surroundings. As we have the same problem, we might try the same solution. 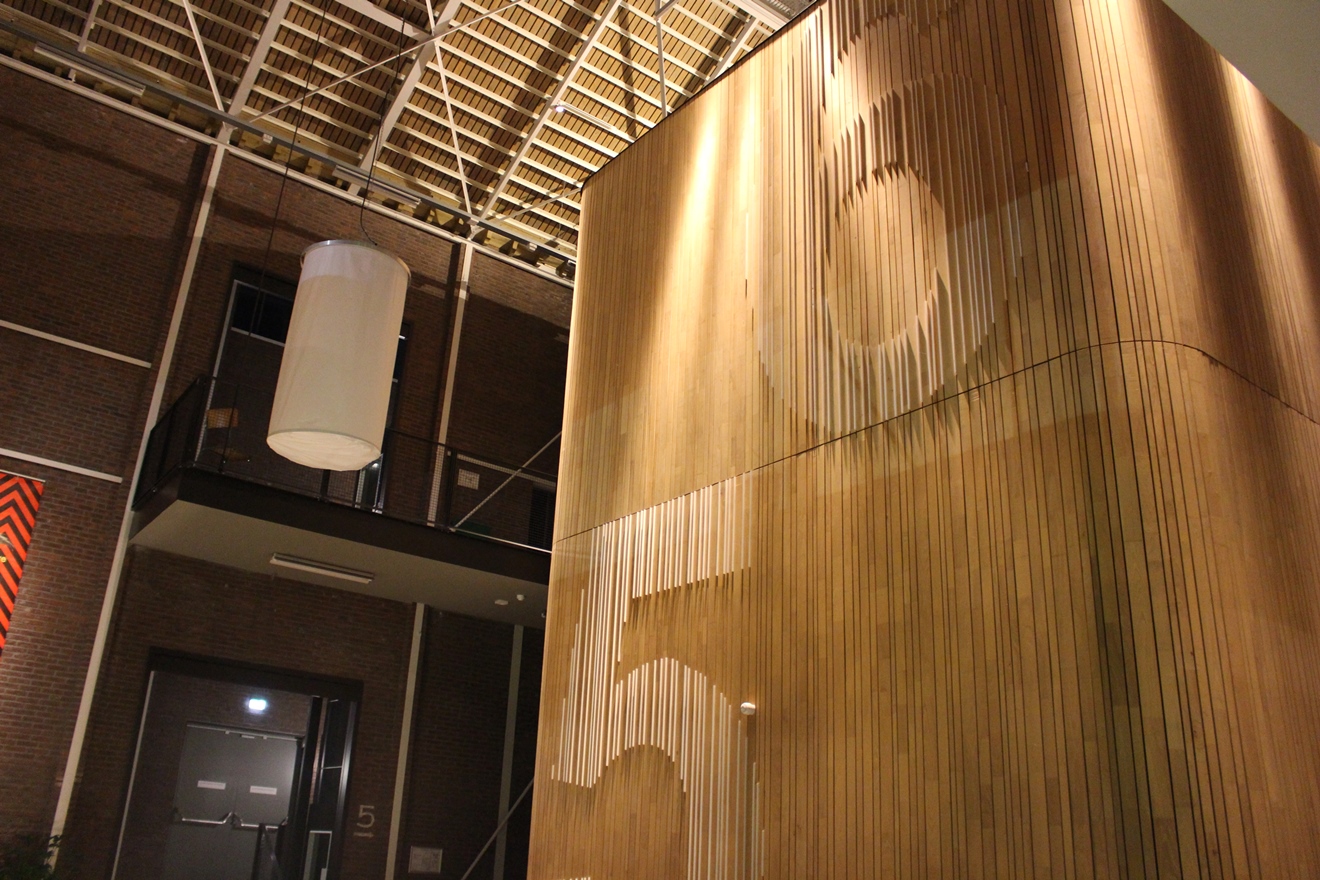 I have collected some other ideas we are certainly planning to steal *ahum ahum* “borrow”. As we struggle with archiving all our or old posters and banners, Lumière had some interesting ideas to deal with that: in their gift shop (also a nice idea), they sell totebags made of old film banners. They look quite nice and are the perfect gift for film aficionados. We have already started looking into people who might want to work with us on this. As for posters, they organize an annual poster sale. Many people are interested in old film posters, so this will definitely work in Ghent as well. In terms of communication, they have stopped “grouping” specials into serials because it is too complicated for the public. As we also have, for example, our ‘Cracking the Frame’ monthly film programme of art films (and many more), we encounter the same problem. We will emphasise the names of those series less to the public. For some of their special events they collaborate with local student clubs, we have now started to do the same.