At Camera Zwo and Filmhaus in Saarbrucken

When you work in the culture area and especially in a small country like Slovenia, the conditions of the market can change quickly, so you have to be prepared and flexible in order to react fast. 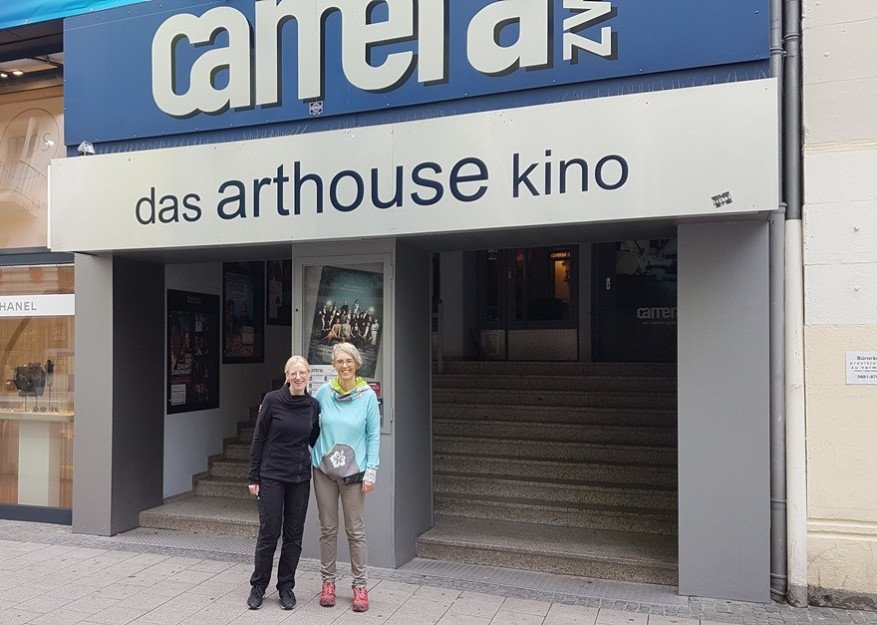 During my exchange, I visited two cinemas in Saarbrucken : Camera Zwo with six screens and the single-screen Filmhaus. I met Anna Reitze, manager of the cinema, in Locarno in 2018, where I was inspired by her stories.

The cinema I work for and manage (Kosovelov dom Sežana) is a small-town cinema, a multi-purpose cultural centre - the only one in the town, where we held theatre plays, concerts, exhibitions (2 galleries in it) and other cultural events beside cinema. Since we need to share our space, we are usually able to run approximately 200-250 screenings per year.

While I was visiting the cinemas it was a renovation time for the lobby of the Camera Zwo as they were renewing and replacing the counter, so I was involved in the process which was very interesting. As written above Camera Zwo has 6 screens (73, 156, 93, 74, 49 seats and a small one with 16 seats). Room 1 was not operating as cinema at that time, as it was used as a temporary office/storage room to compensate for the missing counter. For me, it was very interesting as we are not selling anything you can eat or drink at the cinema and it is also forbidden to eat and drink inside the hall. With Anna, manager of the cinema, we had a discussion about this topic and coming back here I am still thinking about this. As we are not only a cinema venue, it is sure we cannot let the popcorn in (mostly because of the smell). But we could think about selling some sweets and drinks in bottles. On the other hand, people here have rather different habits, could we afford with the extra profit to pay an additional person selling just few things? Since the Camera Zwo is run privately without any municipal support, selling popcorn, drinks and sweets is an important part of financing the business.

The smallest room is ideal for parties, birthdays, and small groups. Anna told me that the room is rarely used for regular screenings, it is rented to groups mostly. Aside from giving people the opportunity to watch their favourite movies in private but on a big screen with surround sound, people can also bring their gaming consoles and spend time together by playing games. As we also have another small hall (now used for dancing classes mostly), it encouraged me to think about how we could use it for the next years if there will be no more renting for the dancing schools.

Camera Zwo is situated in an old building in the centre of the city. It once was the biggest cinema in the southwest of Germany with over 1300 seats. The owners invested in the cinema in the year 1970 and split it into three rooms. The second big investment was in the 80s when another part of the building was transformed from a bar into another 3 smaller rooms. The way the entrance was built was not suitable to sell online tickets, because of the position of the counter so a first step this year was to renovate the lobby. It is planned that on the less busy days customers can pass by a scanner with tickets bought online – either printed out or with the ticket code on their phone. They also needed more space to sell things as drinks and food. Anna told me, that the investment was feasible because of the yearly support from Europa Cinemas. 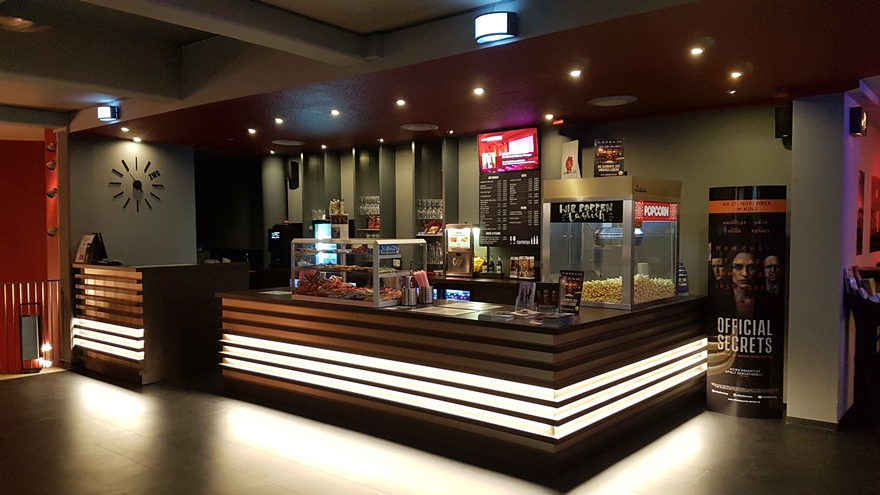 The main purpose that led me to Camera Zwo was to improve my skills and expertise in the areas of programming & customer relationship. We are programming one month in advance, while they are doing it on a weekly basis (as most of the cinemas in Germany) so I wanted to know more about the process of programming. Until now, we had to do it monthly as we are publishing a monthly ‘informator’ – a brochure with our entire programme, including the dates of the films. That is why we cannot add or retire screenings of a film that is doing well or less good.

Filmhaus (run by the same company) is 800 m away from the Camera Zwo, about 10 minutes walking. The building itself is rented by the municipality and Camera Zwo does the programming. About 30 percent of the visitors come from the surrounding towns and cities and from France.

The program in this cinema is different with more special events and films only screened once followed by discussions. Various festivals (Japanese, Latin-American, Italian weeks) and scientific lecture series supplement the regular program. The municipality has to tell their needs for the hall in advance, of course, if needed. And there is a weekly meeting with the responsible municipal manager of the Filmhaus to coordinate the cooperation.

The two cinemas share the same weekly leaflet, which is a very rational use of resources. There is also a combined magazine, published every two months. In this magazine the planned movies and starting date are presented but not the screening times. It is financed by distributors who pay to have their new movie on the front page or ads for their movies inside. I found the brochure very nice and with clear messages and minimalistic design which I really like (the description of the film and a photo and no useless info or design). As I am thinking of how to change programming, this was very useful, too. As you have to tell your audience what you are screening, just do not define the dates. You can only write that the film will be screening from certain date on and that is all.  It made me think more about programming. Are we trying to screen too many different films? 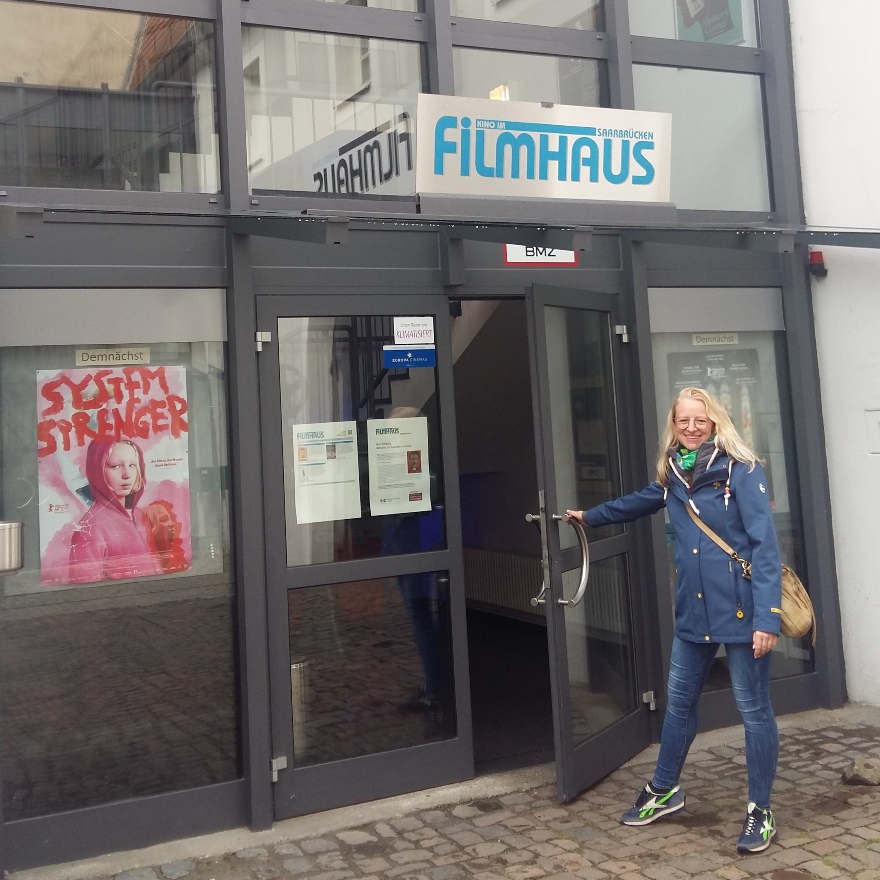 When you work in the culture area and especially in a small country like Slovenia, the conditions of the market can change quickly, so you have to be prepared and flexible in order to react fast. I would like to change our programming methods in the future, maybe already in 2020, in order to do only a weekly programme. But how to inform our audiences? How to reach new ones? How to change promotion activities in order to still inform older people who are not using internet? I think this is very connected with our website, which needs to be refreshed.

Aside from advertising their program in the local newspaper and the weekly flyer, my hosts have flyers for special events as well (for example for the opera transmissions from the Royal Opera House in London).  What I found smart is that they promote them in combination with single events (on one side opera, on the other side single special events). They are focusing more and more on Facebook and Instagram as we do as well. The cinema is full of posters, banners and (what I envy the most) elliptical cardboard stands. The cinema is paying an amount of averagely 10 euros per movie to each distributor who provides them with promotional materials like posters, banners and cardboard stands. In Slovenia (because is a small country?) arthouse cinemas do not pay distributors the promotion costs, but then we only get some posters. Multiplexes in our country get also other kind of materials. When meeting our distributors personally, I will discuss with them the idea of a similar concept.

I also discovered how a cinema could operate with an automatic system for screening so that no projectionist has to be in the projectionist’s room. Camera Zwo and Filmhaus use the servers' schedule option, a time-related automatic start system. The projectionist only goes into the projection booth when an error occurs. This way he/her can efficiently support sales at the counter or help checking the rooms’ cleanliness after a screening.

This exchange was a great experience for me as I learnt a lot. I discovered how a working day in a big cinema (which is only a cinema!) looks like. This visit inspired me in many ways in the fields of promotion, programming and human resources also.

I would like to thank the whole team of Camera Zwo, especially Anna and also her boss Michael who let her spend time with me and of course Europa Cinemas for giving me the opportunity to do this amazing experience.