A Conversation with the Europa Cinemas Jury Label

Each year, EU countries are represented in Venice by a jury of young women and men from all over Europe under the 27 Times Cinema initiative. The 27 jurors are selected among the audience of the Europa Cinemas network. One of their tasks is to award a prize to the best film of the Giornate degli Autori selection. The 27 spoke with the four Europa Cinemas Label jury members Federico Babini (Director, Spazio Alfieri, Florence, Italy), Piotr Czerkawski (Programmer, Kino Nowe Horyzonty, Wrocław, Poland), Meryl Moser (Director, Cinérive S.A., Vevey, Switzerland), and Andrea Stosiek (Director, Sputnik Kino, Berlin, Germany) about their experience as exhibitors and their collaborative work as jurors during the eighteenth edition of the Europa Cinemas Label at Giornate degli Autori. 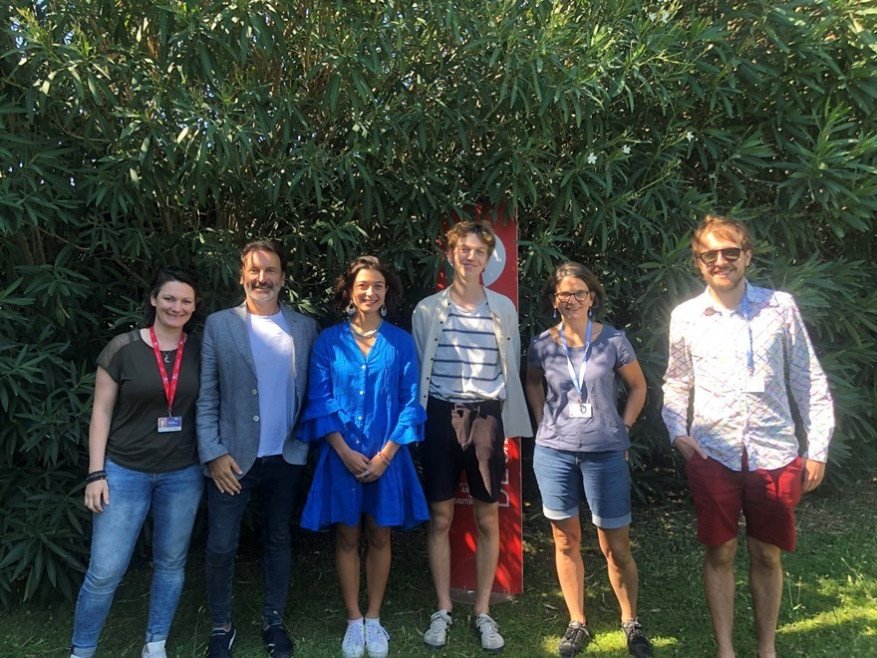 Why is it important for cinemas in Europe to be part of the Europa Cinemas network?

Andrea: Europe has such a great history and through the Europa Cinemas Label people can recognize European films as what they are. There is a personal connection established for the audiences themselves by even just watching the Europa Cinemas trailer. We are part of a community, this is what makes it so special.

Piotr: We all know how dominant Hollywood films are, but from our perspective - as people who would like to show European arthouse films - it is very difficult to compete with the American market, which makes it even more crucial to be united as a network.

What could be the impact of the Europa Cinemas Label in the career of a movie?

Meryl: It mostly impacts the exhibitors, who are held responsible for the screening of the movie. As an exhibitor, you have to build a certain degree of trust between you and your audience, which is connected to the Label.

Piotr: It is also important for the distributors. When a movie is connected to the Label, this guarantees its presence in other European cinemas as well as its support.

Do you see a shift in the public that goes to the cinema over the last 2 years?

Piotr: There is an obvious change due to the pandemic, of course. The special events are becoming more popular than regular distribution- a single screening may attract more people than regular ones.

Federico: Unfortunately, my cinema has lost a lot of older cinema-goers due to the pandemic. But movies are made to be screened in movie theatres, we need to keep the fight.

Andrea: The digitisation has impacted us a lot, through the usage of subtitles and non-dubbed movies, we have gained much younger and international audiences. The arthouse cinema audience in Germany has not changed that much over the years.

Meryl: People who watch movies will always return to the cinemas. I strongly believe that movie theatres are places to meet other cinema lovers and connect with them. Shifts may appear, but we need to keep up with the development of the audience.

With the rising usage of VOD platforms, how do you see the future of cinema theatres?

Piotr: We are a big organization, we also have a distribution company and film festivals so it was easier for us to get through the pandemic. I think that people who are watching films at home are still getting used to watching films. But then when they come to the cinema we can give them something extra, a Q&A or a meeting with the director for example.

Federico: I think it is not even the biggest problem that people are watching films on streaming platforms, but the platforms are also starting to produce films, and I’m afraid this will impact the films and there will be slight changes in how films are made. They are ready-made for platforms instead of cinemas. I think that can be a real problem.

Andrea: In Berlin, we have a founded a network of independent cinemas called IndieKino, and during the second lockdown we have formed our platform together. We are now running the arthouse programme on this platform, with different films each month. But - and this is very important for me - the film theatre always comes first. We don’t screen any films that are still in the cinemas. We don’t want competition between the cinema and the screening platform.

Meryl: I understand that a movie should be in the cinema first, but it will not be like that anymore. Especially with big movies, people will watch them at home, but I think the audience or arthouse movies will continue to go to the cinema, this will be less of a problem. I believe that we should go along with the streaming platforms, play with them, and not be against them.

When you are deciding on a film that you would like to screen in your cinema, are you searching for certain values?

Piotr: I think that would be very dangerous because the quality should be important. Many films are made with good intentions, but the films themselves are disastrous.

Federico: For me, it is more a combination of what Piotr says and the topics that I am looking for. Is the movie talking about socially important subjects?

Andrea: I truly believe that cinema is there to tell stories that might not, and should not please everybody. Films show people something that is out of their little boxes. Cinema is also there to educate. I think my audience trusts my cinema on the fact that all the films we are showing are there for a certain reason.

Meryl: I would agree with the others, but for me, it also depends on what the public wants to see, we know ours and we show different movies in different cities because the cinemas attract different audiences.