An interview with Pierre-Emmanuel Le Goff

Having attracted 25,000 spectators in France within one month of lockdown, La Vingt-Cinquième Heure has set itself apart. Through the medium of a virtual cinema, this company organises film events, within set geographic locations, with real film theatres; screening films that were released before shutdown and showcasing new works, in partnership with their distributors. In discussions about VOD and screening windows, restricting events to specific geographic locations was often suggested as a way of connecting arthouse films with audiences, using new technology. In this interview, Pierre-Emmanuel Le Goff, CEO of La Vingt-Cinquième Heure, talks about his company’s journey and gives a few pointers about the development of this virtual cinema which has already hosted more than 500 screenings (including 200 with discussions), in almost 200 French film theatres. 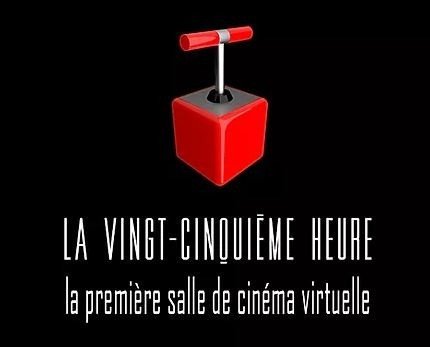 Could you tell us a little about the company’s past and how it has developed?

Before I formed the company, I had a very unusual experience when I produced the initial crowdfunding short for a film entitled ALICE IN MODERNLAND by Marie-Eve Signeyrole. I also had some experience of distribution when I managed the release of DONOMA in 2011, a self-produced film which was shot guerrilla-style by Djinn Carrénard.

The production and distribution company La Vingt-Cinquième Heure was formed the following year. To date, we have distributed around 20 films, including shorts and feature films, TV documentaries, IMAX films and films for planetariums.

From the outset, we wanted to be original and to explore new territory for narration – from the funding stage through to distribution – using digital tools. Our most emblematic project focused on the mission of the astronaut Thomas Pesquet and took various forms including a TV documentary, a 30 minute IMAX film, two films for the cinema (16 SUNRISES and THOMAS PESQUET, L'ETOFFE D'UN HEROS), two planetarium films and a VR film, the first film shot in space, which was circulated via our VR box in cinemas in France and abroad. The finale for these releases was an evening with Thomas Pesquet at the Grand Rex which attracted 3200 film lovers. For this event, we set up a pop-up cinema for the VR experience and invited Guillaume Perret, who composed the film’s score, to play. We also produced the original soundtrack with Sony and PIAS and published the Blu-ray/DVD combo. The cinema occupies an essential place for us because it is our job to find ways to reach audiences, with original content, and to organise events.

In early 2018, for the release of 16 Sunrises, we separated our distribution and production activities by creating a new company. One side handles production and the other focuses on distribution, publishing, VR and now, the virtual cinema. 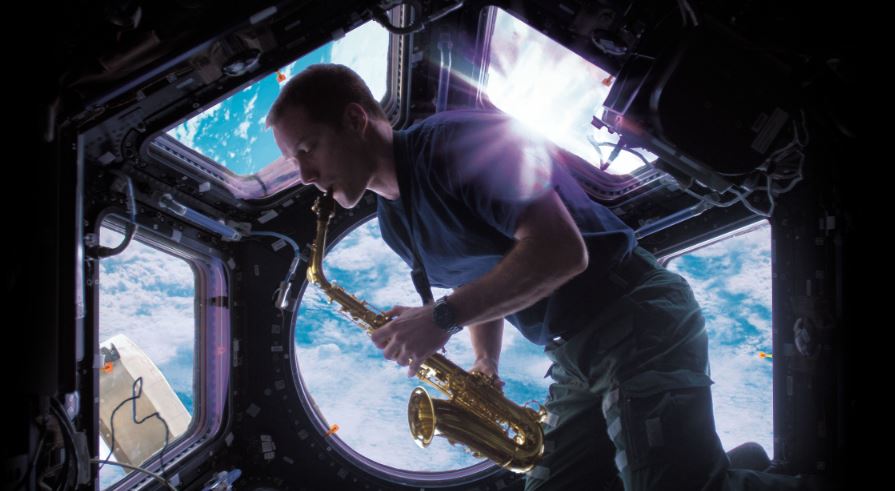 With cinemas being forced to close because of the virus, you seem to have picked the right moment to launch your “virtual cinema”. How did you go about setting up this new service?

Preparations for this were in place before cinemas in France closed.

Most of the films we produce and distribute are screened in independent cinemas and gain popularity over the long term through meetings between filmmakers, audiences, and community groups. Discussion sessions are difficult to fund because cinemas don’t necessarily have the resources to pay travel expenses to professionals, who themselves receive no fee. Filmmakers can’t do more than about 40 interviews, it’s just too time-consuming.

We wanted to get our films out to audiences, via the cinema auditorium and meetings in cinemas, even if they had already been on release in film theatres for many weeks. So, we’d developed a tool and were planning to charge an extra euro for admission to the screening so we could give these additional takings to the filmmaker.

The virtual cinema concept was going to be launched for LES GRANDS VOISINS, LA CITE REVEE, which we produced and distributed. The closure of cinemas on March 15 put a whole new perspective on our idea.

Was this difficult to do from a technical perspective?

Yes. The original goal was to enable potential film lovers who can’t get to the cinema, for practical or distance reasons, to enjoy screenings alongside viewers in the actual film theatre.

Before we went into full lockdown, the possibility of audience numbers being restricted (to half capacity for example) also pushed us in this direction; the idea being to make up the drop in numbers with “virtual” cinemagoers.

The biggest challenge therefore was finding the technical resources to geographically allocate spectators to a virtual screening based on cinemas’ customer catchment areas. One cinema’s virtual programme schedule shouldn’t encroach on another cinema. In practical terms, we define these areas with the cinemas, and the radius varies between 5 km from the film theatre in cities to 50 km in less populated places. Developing the technology to make geolocation possible took us one month.

At the same time, we set up a secure online payment system and a video chat facility for screenings with discussions so we can facilitate genuine exchanges between audiences, film crews and contributors with a connection to the film (e.g. Edwy Plenel for Depuis Mediapart, François Ruffin for A Place in the Sun, César award-winning actress Lyna Khoudri for Papicha, Jean-François Julliard, President of Greenpeace France for Douce France.)

What impact has this idea had?

Before the pandemic, we were planning on about 50 cinemas for the release of Les Grands Voisins. When these were closed, we “took over” about 20 to run the virtual cinema in the week of the release. So far, during the lockdown period, the film has been scheduled through around 100 film theatres.

Since then, distributors have been sending us their films and 200 cinemas and 30 distributors are now involved in the project. We work mainly through arthouse cinemas, programming agreements, and now, cinema chains. The first distributors were members of the SDI (Syndicat des Distributeurs Indépendants) like us, but the range is currently growing, and includes e.g. Studiocanal, Eurozoom, Jour2Fête and Shellac.

The exhibitors and distributors are very enthusiastic. They can do their jobs once more and bring audiences together to share works that can help us understand our world and to prepare for the future. 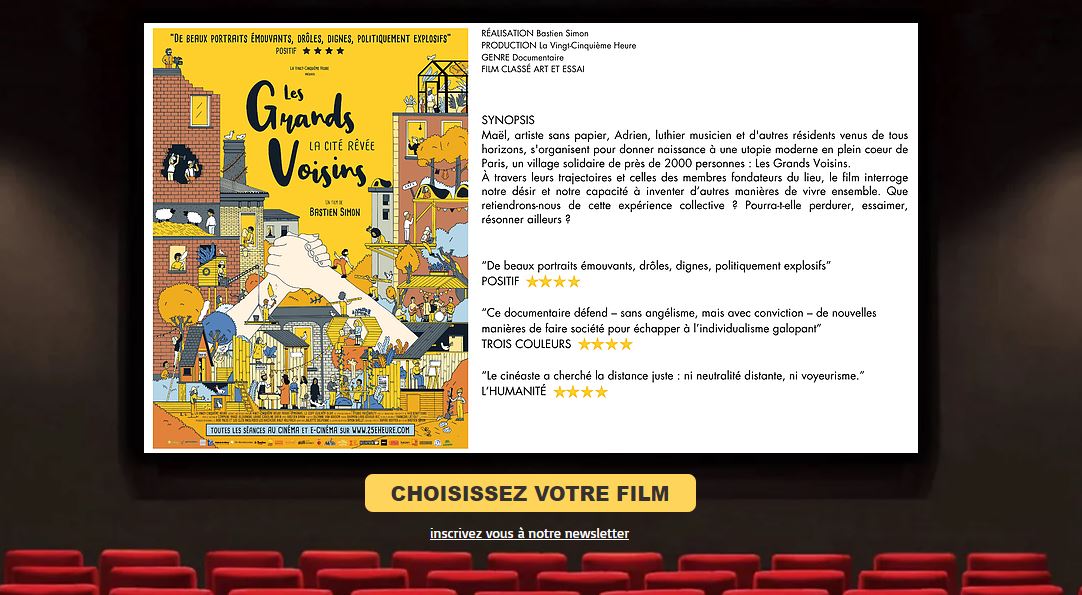 Prices per seat range from €3.50 - €6, even €8. 40% of takings for a screening go to the cinema, 40% to the distributor and 20% to La Vingt-Cinquième Heure. To us, this seems like the fairest allocation. Under normal distribution conditions, we’d be looking at a 50/50 share.

Initial results are promising, and we should break even in the short term. A recent screening, via the Arvor cinema in Rennes, sold 269 tickets at €6 whereas this film theatre’s main auditorium can only accommodate 250 people. Actual room capacity is often exceeded at popular screenings. The very first virtual show, the preview of Les Grands Voisins via the Luminor in Paris, attracted more than 1000 viewers (including guests). And this weekend a preview of Douce France, screening at several cinemas in the Paris region, including Le Méliès in Montreuil, has sold 531 tickets out of a total of almost 700 connections, including guests. That means more than 1500 viewers because the average number of spectators per connected household is 2.4.

What are your plans from here?

Version 2 of the website will go live this week. From a technical perspective, our site easily accommodates the demand. We could consider upgrading our servers if we were to achieve, say, 10,000 simultaneous connections.

On the cinema and spectator side of things, defining geographic locations is no longer an issue. If there are problems, spectators can be located on the basis of a declaration and by providing proof of where they live.

I should point out that from a team of about 10 colleagues, we have six people working solely on developing the service. Paradoxically, at this unusual time, we are also recruiting. One of our IT experts spends all his working hours setting up screenings, so Version 2 of our site incorporates a new interface for distributors so that they can get involved in this process too. We could manage 30, even 50 screenings per day, but if the major players come on board, with releases planned for 300 film theatres, our upgraded site with its back-office facility for distributors will be indispensable.

I assume you are collecting data. What does this tell you?

We know that 30 to 50% of tickets are bought in advance, which surprised us and helps us to plan. As I said, every connection reaches an average of 2.4 viewers. More specific data, with comparisons between cinemas, will help us to fine-tune what we offer according to audiences and the films’ stories. 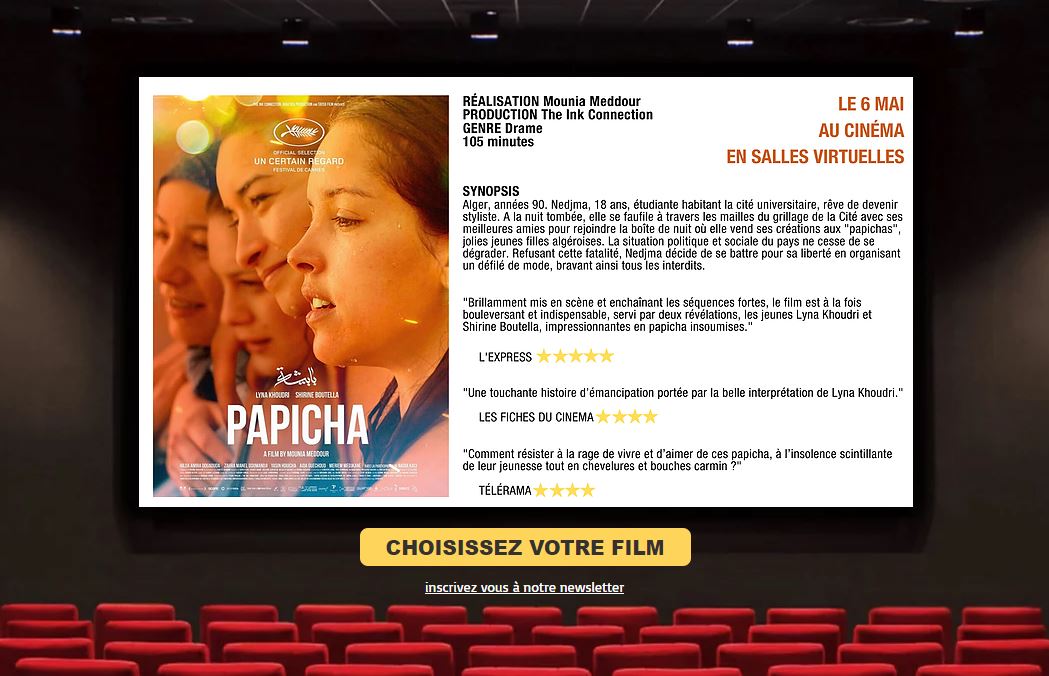 How do you see the future of this service, particularly for film theatres?

Even though the pandemic has created a highly unusual situation, our programming approach closely resembles what we’d normally do. Distributors have retained their role – they are the ones recommending cinemas to us and managing the guests for online discussions and presentations (we do this ourselves for the films we distribute). As far as the film theatres are concerned, we started by working with arthouse venues known for their relations with local organisations and ability to build communities through social media and mailing lists, etc. As is the case with any event, the success of a screening, which remains confined to a specific geographic area, relies heavily on the effectiveness of a cinema’s publicity and its ability to act as intermediary. Depending on a cinema’s experience and situation, a screening could attract between 5 and 300 spectators. Now, in our dealings with cinemas, we are also seeing negotiations conducted in a similar way to the usual, for example, cinemas being interested in one specific event and not another depending on their audience.

For some film theatres, this virtual duplication of the market also has the advantage of accelerating a kind of transition towards online publicity tools. What’s more, beyond the financial rewards, this set-up is particularly beneficial because we’re talking here about films with content relevant to our current circumstances, that are looking at environmental transition and helping to develop narratives and ideas for the alternatives we all need.

We’re also striving to be virtuous from an environmental and social responsibility perspective, by contributing 10 cents per view to offset carbon and encouraging contributors to donate their bonus euro per ticket sold to a cause of their choice.

Ultimately, I hope we can build up a new, younger, online audience who will perhaps discover the power of film events and meeting people and then, be more likely in the coming weeks to visit the cinemas offering these films and events.

We already work with branches of the Institut Français and Alliance Française. We’ve had requests to put on festivals and are going to be announcing partnerships in relation to this, and our plans for an association with distributors and sales companies such as Wide House and Be for Films so we can organise screenings abroad. It goes without saying that we will have to adapt to different financial and economic practicalities and will also need to translate the website.

Do you think that in France, there’s going to be a move towards recognising these screenings as screenings in their own right?

That’s our hope and we’re putting together a report about this for the CNC. Can a trip to a virtual cinema be thought of in the same way as an actual visit and could we recover TSA (an additional tax on cinema tickets) and access funding support as we would like to? This question came up before everything closed and we went into lockdown, but it wasn’t the right time. Now, we think we have what we need in place to show that this system works. 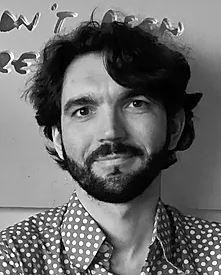