Spain: A Contracorriente Films, The Virtual Cinema and the ecosystem in the film industry

On 6 April A Contracorriente Films – a Spanish distributor with over 1,500 titles in its line-up – launched its Sala Virtual de Cine (Virtual Cinema) to offer films from its catalogue in collaboration with movie theatres. It already has 30,000 registered users, 81 associated Spanish cinemas and other local distributors have joined in to release their own content. We spoke with Eduardo Escudero, who has a holistic vision and feels that when it comes to premieres, cinemas must always come first in the industry’s ecosystem. 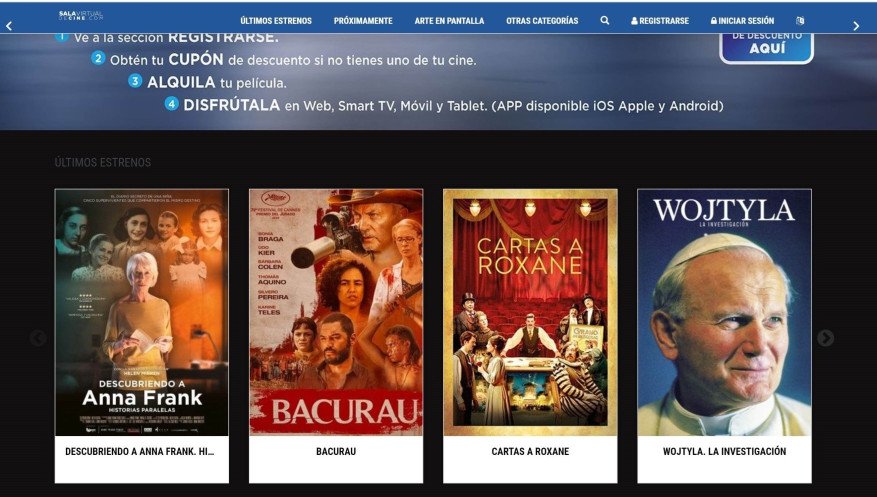 Could you tell us a about the evolution of A Contracorriente Films and its activities in exhibition?

We began the A Contracorriente Films adventure in 2009, when we launched the company although our first releases came in the spring of 2010. Essentially, we are distributors of independent films, the kind that we call ‘feel good’. We also produce a few films a year and since 2014 we have been running the Conde Duque Alberto Aguilera, Goya and Santa Gracia cinemas in Madrid.

In addition, since 2015 we also run the Verdi cinemas in Barcelona and Madrid. All of them are city-centre cinemas but, unlike the Verdi cinemas which are arthouse cinemas showing mainly European films in subtitled original version, the Conde Duque cinemas are more mainstream, screening dubbed versions.

How did the Sala Virtual de Cine initiative come about and who else is involved?

The Sala Virtual de Cine did not start from scratch during the period of lockdown; we were already working on an on-demand service that complemented the work of the Verdi cinemas.

The project took a turn when the health crisis hit. We were anxious to remain in contact with our filmgoers during the period of cinema closures, so we decided to get the project off the ground as a communication tool. We realised that if it was good for our cinemas it might also help others to stay in touch with their audiences. To date, 81 cinemas have joined us.

We also began working with other distributors. For example, on 8 May we premiered Wojtyla. La investigación (José María Zavala) distributed by European Dreams Factory and we will shortly be releasing Bacurau (Juliano Dornelles, Kleber Mendonça Filho) from the distributor La Aventura Audiovisual.

Viewers can access new release and rereleased films on the Sala Virtual de Cine for 72 hours at the price of a standard cinema ticket of 6.95 euros.

We are pleased to offer a tool that can benefit both cinemas and distributors in Spain.

Were you inspired by other models?

We were. In fact, we had been looking at Picl in The Netherlands and we have been in contact with them but, in the end, we decided to create our own platform.

I found their initiative interesting because it is a model that shares our values. The most important one, is that cinemas play and should continue playing a major role - the primary role - in film releases. Apart from being the best places to watch films, cinemas also give films a brand stamp that no other distribution channel can offer.

But we have to understand that times are changing and that the health crisis has accelerated these changes. So we have to ask ourselves what strategies we should adopt in the future with regards to the way films are shown. Films that are most at risk or that have a niche audience such as documentaries, now have this digital platform to give them a second chance in collaboration with cinemas.

We are open to collaboration and to sharing experiences with Picl and other similar initiatives in other countries. We are also in touch with Lucky Red for the MioCinema platform in Italy, and I think we will continue to share knowledge and strategies which will be highly beneficial for the model’s future.

Was it a complicated project to implement on a technical level?

It was extremely complicated. Although we had already been working for quite some time with a company that helped us and got us up and running straight away, we are still working to improve it to offer the best possible product with the added asset of having the support of the cinemas.

Do you have any trends or figures you can share with us?

The most/highest traffic is generated by the film-loving cities where good movie theatres are located (all of them members of Europa Cinemas), regardless of whether or not they took part in this initiative.

The film industry is an ecosystem and movie aficionados that go to the cinema, today subscribe to platforms. In turn, people who watch films on platforms and follow a particular director, or come across one on the platform, will seek to watch future films by that director on the big screen.

What do you think about the possibility of the screenings on the Sala Virtual de Cine being recognised as though they were standard screenings?

It would make sense and it might be necessary in the future. But only as long as the first place where the film is shown is a cinema. It is very important for all these initiatives to maintain their close ties to cinemas and to understand that film theatres have priority in film releases. We are trying to complement, not to replace.

Cinemas are allowed to open since 25 May. How do you see this reopening in Spain?

In certain areas they can open on 25 May but in fact distributors don’t have any new releases in June, probably because there is no time to prepare them. And cinemas cannot just show reruns and programme classics for a month.

Everything seems to indicate that 26 June will be the date when the first new releases will be shown, coinciding with the date by which most Spanish cinemas should up and running. A Contracorriente Films has offered all cinemas the film Cinema Paradiso (Giuseppe Tornatore) so it can be programmed in their first session on 26 June as a memorable event for the comeback of the cinema. We are hoping that lots of film theatres will join in the initiative.

And what about the Verdi cinemas?

Verdi cinemas will open on June 19 and their first screening will indeed be Cinema Paradiso. They will then programme classics and films which were on the billboards when the cinemas were closed down. We need a week to prepare in terms of logistics and to apply the precautionary hygiene measures before we start hosting premieres.

Furthermore, the Verdi cinemas in Barcelona are hosting the BCN Film Fest from 25 June to 2 July which usually happens around Sant Jordi day which is also Book Day (23 April). For reasons known to all, we had to postpone it and it will be the first festival people can attend following the lockdown in Spain. This edition wants collaborate with the shared objective of bringing audiences back into the cinemas at the same moment of their opening. Complying of course with all the hygiene measures needed to guarantee the safety of cinemagoers.

Which new releases are confirmed for the reopening of Spanish cinemas?

A Contracorriente Films has very ambitious new releases scheduled in July for the recovery of the public. We felt it necessary to offer major movies from our slate to the exhibition sector in the critical reopening period. We have decided to take the risk of releasing them instead of waiting until November.

These are the films we have scheduled for release:

14 August: One for All (Uno Para Todos) (David Ilundain)

At the same time Warner Bros will be releasing Pinocchio (Matteo Garrone) on July 3rd and most probably Tenet (Christopher Nolan) on 17th of July. And finally, Walt Disney has Mulan scheduled for release on 24th of July.

And the second part of Father There is Only One (Padre no hay más que uno) (Santiago Segura) is coming out in August, which is a local comedy that could stimulate the box office.

Do you think many cinemas in Spain will not reopen?

All cinemas will reopen. However the permanent closure or not of cinemas is not going to depend on the period of lockdown but on what happens after reopening.

If government helps drop off, what will happen if audiences don’t come back to the movie theatres? If there are no audiences in the early weeks of the reopening, not only will there be cinemas that close down but distributors will also disappear.

What do you think of the extraordinary aid announced by the Spanish government for cinemas (13,252,000 euros)?

Appropriate measures were implemented in Spain to help cinemas through this difficult period and the government opted to support them for the reopening with a budget of 13.2 million euros to invest in making their facilities safe through hygiene measures, etc. But one more thing is needed if the market is to be revived: the audience. Without them, all the efforts made by the industry will be in vain.

I therefore believe that we are taking a risk by relying entirely on the product, on safety and on “people’s desire to come back to the cinema”. I think that national, regional and local authorities should support the audience. A big cinema party subsidised 50% by the state would bring audiences back to the cinema more quickly.

In Spain for example, with a budget of 15 million euros we could bring in 5 million cinemagoers: where the ticket costs 6 euros, the audience would pay 3 euros and the government 3 euros. I am certain that this would get cinema attendance back up in record time. Because if we fail in the first five or six weeks, what distributor is going to hold back new releases from the seventh week?

Do you believe that after the crisis the government is going to be open to the creation of a periodic line of financial aid for cinemas?

Direct aid for cinemas had never been available before now. The Spanish central government has always argued that exhibition comes under the jurisdiction of the Autonomous Communities. For me it is more a question of will. I hope that this situation is a step towards public authorities understanding the importance of cinemas. Little by little, politicians at all levels, European, national and regional, are realising that the film industry is an ecosystem. Most of the money has always gone to support production, but they are beginning to realise that exhibition and distribution are very important too. The existence of Europa Cinemas and the support the Media programme has historically given to distribution proves this. However, we still need more connection between us all, because in this ecosystem what is good for one of the parties has a positive impact on the rest.