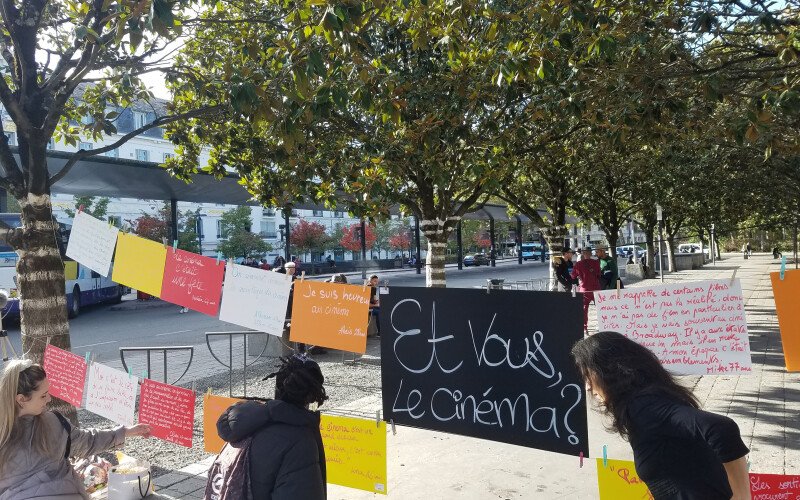 The "Transmit Cinema" project aims to raise awareness and train professionals from the socio-cultural world in arthouse cinema so that they can take ownership and bring groups of spectators to discover these films in theatres.

This project was born from an observation made during interventions in working-class neighbourhoods. The public of these districts does not go to arthouse cinemas because of different obstacles: lack of media coverage of these films, difficulties in engaging with cultural places or price of the screenings. On the other hand, professionals of social centres and local organisations do not take up the film offer either, due to a lack of knowledge and awareness.

"Transmit Cinema" wishes to propose training courses on cinema to professionals of local organisations and to cultural mediation and social workers. Cinemas often lack the time and/or knowledge to set up partnerships with socio-cultural actors.

The training is developed by professionals working in the field of popular culture in order to effectively answer the questions raised. It also uses the methodology of popular education based on the realities of each one in terms of cinematographic knowledge, while questioning the vision of each group in order to change mental boundaries and allow access to European art films.

The first step of the project is based on the designing the trainings. A diagnosis of the cinematographic practices in each territory of the partner cinemas allows an inventory of the skills, needs and expectations to be drawn up. The training is then developed along 2 lines. The first line focuses on theoretical notions about the history of cinema and the evolution of techniques, the different professions and structures involved in each phase of the production of a film, the presentation of the diversity of genres, countries, directors or major themes. The second line addresses the practical matters of building a workshop around a specific film.