Cinema is not dead: the rebirth of a young and funky arthouse cinema in the Košice city centre 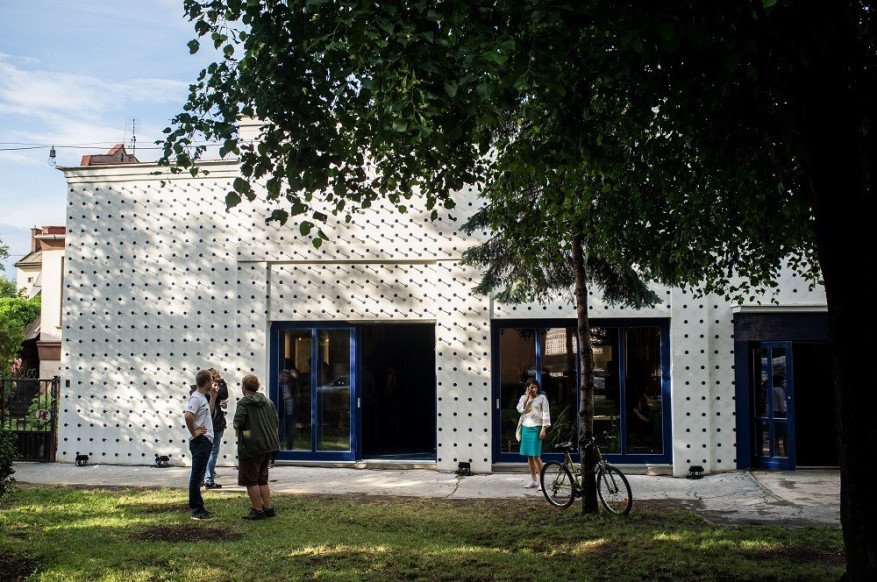 The history of our cinema started in 1922, with the history of our organisation beginning only a “few“ decades later, in 2001. Two disparate stories, with their ups and downs which, thanks to fate, crossed paths, found their very own Happily Ever After. Well, for now, at least.

In 2001, our organisation, with a fairly self-defining name, CINEFIL, ran a popular film club in downtown Košice, Slovakia. We screened one movie a day, hosted festivals and premieres, and focused mainly on European production. CINEFIL Film Club was the only art-house film venue in town. At that time, there were three more cinemas in Košice still running – Kino Usmev, Kino Družba and Kino Tatra. All were old soviet-built cinemas with their own specific charm, but with a declining quality in programming and no ambition whatsoever to innovate the 35mm technology.

Around 2009, the first multiplex in Košice opened in a shopping mall on the periphery of the city, a sounding death knell for these old cinemas. One by one, unable to face the competition of fully digitised and brand-new cinema complexes, historical buildings were closing down, with cinema culture being almost entirely wiped out from the downtown area. On top of that, our CINEFIL film club had to close down in 2010, too. The owners of the building decided to refurbish the room, not intending to re-open it as a cinema. This equated to the “rise and death“ of Košice cinema culture – not uncommon among post-socialist countries in Central and Eastern Europe.

But, as they say, there is (almost) always a light at the end of the tunnel. Our bright, shining light in the distance was Kino Usmev. Located in the very heart of city centre, with 300 seats, enough room for two screens, a bar, summer garden, basement for co-working, offices and a film studio, this was the perfect fit.

The new team at CINEFIL created a project called “Kino Usmev – centre for audiovisual culture“ and began lobbying the city of Košice.

With Košice being awarded European Capital of Culture in 2013, the city launched and was more open to cultural projects (it seemed). However, re-opening a local cinema was not among their priorities. We were allowed to hold a few screenings a week in Kino Usmev over a period of six-months. We were more than happy, but couldn´t really innovate, digitise and establish a fully operating art-house cinema. At the end of this six-month period, the city decided against giving us permission to extend our tenancy. We launched a petition, collecting more than 2000 signatures in less than a month, but to no end. Our passion was high, but the odds were low.

The breakthrough came in 2015, and it really was a tipping point. A point at which we would either give up or get the venue. It was impossible to continue under our “travelling cinema“ conditions and do our job properly. Some team members really wanted to come back to Košice from abroad and, as such, returned to commit to project Kino Usmev. The hunger for a proper cinema in the city, which houses 270,000 people, with only two multiplex cinemas situated in shopping malls, nowhere near the city centre, was obvious.

We decided to do it strategically this time around, leave the punkish attitude of petitions and protest behind and opened a dialogue with the municipality

For the first time, and for some reason, they really listened and helped push our proposal to city council. Because Kino Usmev (translation: Cinema Smile) is a loved brand in Košice, all deputies at the hearing voted YES – YES to a fifteen-year lease for Kino Usmev.

We opened on June 9th 2016. Our two opening shows were completely sold out and, since then, we’ve screened films every day. We have a bar, an alternative underground space for other cultural programming, and are about to open a second screen. We are a team of twenty, we are a Europa Cinemas member (!), and we host many other funky events including a Street Food Festival, thematic weekends (like our Mexican weekend), movie marathons, quizzes, exhibitions and parties.

We are a dog friendly and drink friendly cinema, which means you can bring both dogs and drinks. We try to be as inclusive as possible and organize screenings for diverse audiences, from baby friendly screenings, to vegan screenings and LGBT+ screenings and parties. We work a lot with the street art and skate community, as well as local schools.

Owing to our central location, we even attract groups that we don´t specifically target. For example, we didn´t have the capacity to organize screenings for seniors, but they began attending baby friendly screenings, which has made for a great atmosphere of intergenerational harmony. Above all, we are a partner cinema of the biggest international film festival in Slovakia, Art Film Festival, which we co-organise and host every June.

We also aim to be the greenest cinema in Slovakia and a real centre for audio-visual culture – home for freelancers working in film and gaming as well as artists.