At the Eye Film Institute, Amsterdam

In only a few years, the EYE Film Institute has established itself as one of the world’s leading cultural destinations. A state-of-the-art national film centre that has become one of Amsterdam’s most iconic landmarks, the EYE embodies a level of commitment to film by the Dutch government that other countries can only envy. A trip to the EYE has been on my ‘to do’ list for quite some time so it was wonderful to have the opportunity that Next/Change gave me to pay it a visit. 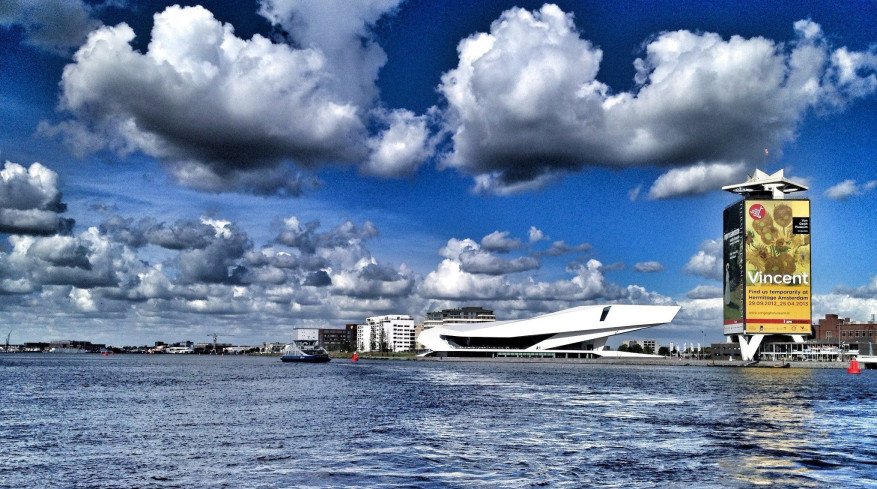 For those who haven’t visited, the EYE is located across the IJ Harbour from Amsterdam Central Station with a shuttle ferry service running every few minutes between the two. Getting the ferry adds to the impact of a visit - the EYE building is extremely impressive and even more so when seen from the ferry as it approaches. Situated in an area that was previously mostly industrial space, as a visitor destination the EYE has played a significant role in regenerating this part of Amsterdam and it is now thriving with bars, restaurants and a new University of the Arts.

A Project for Belfast

I was, of course, very curious about the EYE and very excited about seeing it, however this was also a fact-finding mission, helping to inform the development of a major project for Northern Ireland – a new, dedicated Film Centre for Belfast.

The possibility of a purpose-built Belfast Film Centre is something that has been a long-term ambition for the city. For many years, the QFT (Queen’s Film Theatre) in Belfast has been Northern Ireland’s only dedicated arthouse cinema, however the building in which the QFT is located has significant drawbacks in terms of screens, space and resources and this limits the QFT’s film programme, education programme and work in audience development.

Over the last couple of years, encouraged by Northern Ireland’s increasingly successful film and television production sector (eg HUNGER, GAMES OF THRONES), the case for the development of a new Belfast Film Centre has steadily gained momentum – it is envisaged this will be a multi-screen cinema with education, archive and gallery space that will be a destination venue for local people and visitors alike and will provide a ‘home’ for Belfast’s film festivals, film industry and creative talent. The EYE Film Institute is a role model for what we would like to achieve in Northern Ireland.

The EYE is a model

While we in Belfast are only at the start of our journey to develop a Film Centre I believe there is a lot we can learn from the EYE, the story of that building’s development and the experience and knowledge of the people who work there. With this in mind, the key focus for my visit was to find out more about the history of the EYE, how the building and organisation were developed, how they now operate and the lessons they have learnt and challenges they have faced.

My primary contact at the EYE was Mila Schlingemann, the Head of Programming. Mila was incredibly helpful and generous with her time and, as well as giving me an extensive overview of how the cinema is programmed, she also set up meetings for me with a number of key staff there including Frank Roumen, Head of Archive; Stan Spijkerman, Head of Finance; Michiel de Rooij, Head of Policy and Strategy and Head of Marketing and Communications, Marjilijn Bronkhuyzen.

I spent three days at the EYE and while I was there I was given an in-depth insight into the EYE’s work in a range of areas including Programming and Curation, Archive and Restoration, Marketing and Communications, Finance and Organisational Planning. The background to the development of the EYE was particularly fascinating and had clear parallels to what is being planned for Belfast; the EYE played a significant role in regenerating a previously run-down area of Amsterdam and this is something that is also very relevant to Belfast. Large areas of Belfast city centre are in the process of being regenerated and the development of cultural spaces will play a key part in this.

In all the conversations I had with the EYE team what became very clear to me was that we all face similar challenges in many areas; in audience development (particularly for young people), programming and, most of all, in securing government support for film as a major art form as well as an economic driver. These are universal challenges for the cultural film sector and sharing these concerns with our counterparts across Europe can only be of benefit to us all.

The functioning of the Institute

As well learning about the organisation, I spent quite a bit of time getting a sense of how the EYE works as a building and how visitors interact with the physical spaces. The EYE has over 700,000 visitors a year and it was constantly busy while I was there. The film and events programme for the cinemas is adventurous and stimulating. The EYE has built an international reputation for archive interpretation, 70mm screenings and a diverse film programme    – while I was there I visited the permanent archive exhibition and attended several screenings as part of a Syrian New Wave Film Festival. These screenings were all accompanied by director Q&A’s and I was impressed by how passionate, informed and enthusiastic the audience were about the films they had just seen.

The EYE also has a major exhibition space as part of the building and, while I unfortunately missed a Martin Scorsese exhibition, I was lucky enough to get a behind-the-scenes look at the set-up of the forthcoming Locus: Apichatpong Weerasethakul – Cao Guimarães exhibition. From what I saw, this promises to be very impressive.

I had hoped the EYE would be an inspirational place to visit and it lived up to my expectations. Even more importantly my trip is the first step in building a closer relationship with our friends and colleagues in Amsterdam, sharing knowledge and helping to gain invaluable advice and learnings for the development of our own Film Centre.